When It Comes to Children, Don’t Let Your Religious Beliefs Trump Modern Medicine

In his latest book, Bad Faith, Dr. Paul Offit explores the world of parents who trust God to heal their sick children — to the point where they don’t bother taking their kids to a doctor — even when the consequences can be fatal. 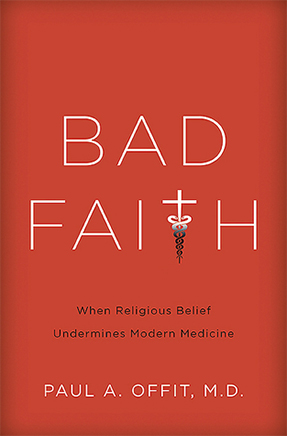 Although America is the most medically advanced place in the world, many people disregard modern medicine in favor of using their faith to fight life threatening illnesses. Christian Scientists pray for healing instead of going to the doctor, Jehovah’s Witnesses refuse blood transfusions, and ultra-Orthodox Jewish mohels spread herpes by using a primitive ritual to clean the wound. Tragically, children suffer and die every year from treatable diseases, and in most states it is legal for parents to deny their children care for religious reasons. In twenty-first century America, how could this be happening?

The Wall Street Journal‘s review of the book included this weird swipe at atheists:

Given this catalog of wastage, what is to be done? Dr. Offit has far too much respect for religious belief and practice to suggest, like some aggressive atheists, that the world would be better off without its religions. Freedom of religion is of fundamental importance to the fabric of American life. Consequently, he sees hope in the law. Parents should not be able legally to deny their children proper medical care.

I’m not even sure what to make of that. Sure, there are atheists who would love to see a religion-free world, but no one is realistically suggesting that as an “answer” to anything. (Even if you could get rid of religion, which you can’t, pernicious ideas would still be around.)

Like Offit, I firmly believe legal changes are the best way forward. While there’s a debate to be had over when doctors should be allowed to override parents’ decisions (especially in non-life-or-death situations), we can certainly fight to overturn religious exemptions to the law. (Six states currently have a way for these parents to get off the hook in instances of negligent homicide, manslaughter, and capital murder.) If your child dies because you prayed for her in lieu of taking her to the doctor, you ought to be punished for it.

The New York Times‘ Mark Oppenheimer offers a more critical review of the book, saying that Offit oversimplifies the problem by blaming fundamentalist religious beliefs when the real problem is somewhat more complex. After all, it’s not like anti-vaxxers base their harmful beliefs on the Bible. (Today’s “official” review focuses on the importance of the bigger picture.)

On a side note, I’m on the board of advisors for a wonderful group called the “Child-Friendly Faith Project” that works to “protect children from abuse and neglect that is enabled by religious, spiritual, and cultural ideologies.” (Dr. Offit is on that advisory board, too.)

If this is a subject that hits home for you, check out the website, especially the section with resources. Lots of great information there.