The University of Michigan made the stunning announcement this past week that the “near-death” experiences so many people have isn’t really Jesus calling us home. It’s our brain trying to kill us: 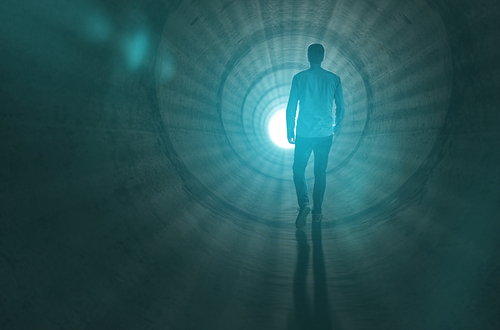 What happens in the moments just before death is widely believed to be a slowdown of the body’s systems as the heart stops beating and blood flow ends.

But a new laboratory study by the University of Michigan Medical School reveals a storm of brain activity that erupts as the heart deteriorates that may play a surprising destabilizing role in heart function.

Researchers with backgrounds in engineering, neuroscience, physiology, cardiology, chemistry, and pharmacology looked at the mechanism by which the heart of a healthy person ceases to function within just a few minutes without oxygen.

… This new study provides a neurochemical foundation for the surge in brain activity and a brain-heart connectivity that may be targeted to lengthen detectable brain activity.

This near-death flood of neurochemicals found in the study included dopamine and norepinephrine. Dopamine, which researchers call the “happiness hormone,” contributes to the sensations of reward and motivation. Norepinephrine, in addition to increasing the heart rate, heightens attention and the fight-or-flight response. Put just these two together, and you get a highly alert, energetic, motivated, rewarded, and happy brain.

In other words, the basis of all those “heavenly tourism” books.

Philosophically speaking, the university rather buried the lede with its headline: “Near-death brain signaling accelerates demise of the heart.” But Medical Daily News was quick to pick up the larger implications in its headline, “Near-Death Experiences May Be Explained By Heart-Brain Connection.”

A new study from the University of Michigan Medical School shows how the brain sends signals to the heart in the moments before death. It is this flurry of mental activity that is key to cardiac demise, the researchers say, and quite probably the foundation of near-death experiences as well.

Study researcher and co-author Jimo Borjigin published related findings in 2013 titled “Electrical signatures of consciousness in the dying brain.” In that press release, the University of Michigan did focus on the NDE angle. It makes me wonder if they received a backlash from religious people that caused them to omit such references this time around:

The “near-death experience” reported by cardiac arrest survivors worldwide may be grounded in science, according to research at the University of Michigan Health System.

… a U-M study shows shortly after clinical death, in which the heart stops beating and blood stops flowing to the brain, rats display brain activity patterns characteristic of conscious perception.

Approximately 20 percent of cardiac arrest survivors report having had a near-death experience. These visions and perceptions have been called “realer than real,” according to previous research, but it remains unclear whether the brain is capable of such activity after cardiac arrest.

In an ironic twist, not only does the study undermine NDEs as evidence of the divine, it found that a near-death signaling surge actually harms patients in cardiac arrest:

However the brain signaling at near-death may, in fact, accelerate cardiac demise, according to the study published in PNAS.

Following a steep fall of the heart rate, brain signals strongly synchronized with the heart rhythm, as visualized beat-by-beat using a new technology developed in the Borjigin laboratory called electrocardiomatrix.

According to the study, blocking the brain’s outflow significantly delayed ventricular fibrillation, in which the lower chambers of the heart quiver and the heart cannot pump any blood. It’s the most serious cardiac rhythm disturbance.

“The study suggests that a pharmacological blockade of the brain’s electrical connections to the heart during cardiac arrest may improve the chances of survival in cardiac arrest patients,” Borjigin says.

So if doctors can learn how to stop Jesus from visiting us while we’re dying, they may be able to save a lot of lives.

April 12, 2015
Australian Government: If You Don't Vaccinate Your Kids, We Won't Give You Child Care Payments
Next Post