Fareed Zakaria to Bill Maher: Your Criticism of Islam May Result in “Applause Lines” But It Won’t Create Real Change April 11, 2015 Hemant Mehta

Fareed Zakaria to Bill Maher: Your Criticism of Islam May Result in “Applause Lines” But It Won’t Create Real Change

In one of the more interesting discussions on Islam I’ve seen on Real Time with Bill Maher, panelist Fareed Zakaria challenged Maher on things he’s said about the faith. They actually agreed on some general criticisms of the faith, but Zakaria focused on Maher’s tactics, like using Sam Harris‘ words and calling Islam the “mother lode of bad ideas.” 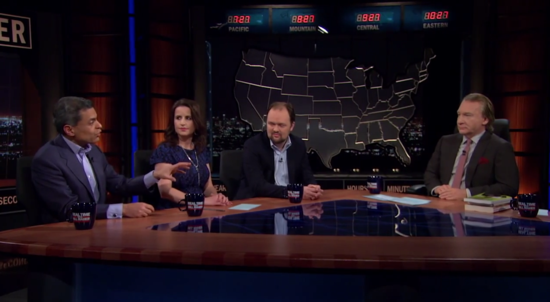 As you know, Bill, I’ve written a lot about the problems in Islam… My problem with the way you approach it is, I don’t think you’re gonna reform a religion by telling 1.6 billion people, most of whom are just devout people who get some inspiration from that religion and go about their daily lives, I don’t think you’re gonna change the religion by saying “your religion is the mother lode of bad ideas. It’s a terrible thing… Shape it up and change it.”

All I’m telling you is I know that world, and if you tell everybody, “You suck. Your religion sucks. Clean it up,” it’s gonna get their backs up against the wall.

For the most part, I think he has a point. In terms of tactics, the harsh rhetoric won’t drive the point home to the masses. But it would be a lot easier to tell Maher (and critics like him) to tone it down if we knew there was an army of moderate Muslims ready to take his place and make a dent with the millions of Muslims who think, for example, death is an acceptable punishment for drawing an image of Muhammad.

Unfortunately, those voices get drowned out, too. So maybe being more forceful and direct with the criticism, as Ayaan Hirsi Ali and Salman Rushdie frequently are, makes it easier for the rest of us to discuss the serious problems within the faith. Maybe it carves out some space for those moderates.

Where Zakaria lost me was his insistence that the notion of death penalties for criticism/mockery of Islam wasn’t really a problem. While the vast majority of Muslims would never kill anyone themselves, a large number of them (13% in the U.S. and 21% globally) say suicide bombings could be justified in some instances. These aren’t all people living under oppressive regimes.

If we can’t even be honest about what Muslims believe, nothing will change, and I appreciate those who have the courage to speak uncomfortable truths.

Make no mistake: Zakaria wasn’t Afflecking here. He wasn’t being a Muslim apologist and suggesting Islam didn’t have any problems. Hell, he freely admitted there was a “cancer” within Islam. And his point about tactics is a fair one. But even he couldn’t bring himself to admit what large numbers of Muslims have already said they believe regarding the penalties for things like blasphemy, apostasy, and mockery… and that’s a huge problem. It’s not just the “extremists” who think people should be severely punished for insulting the faith. It’s not just people living in theocracies, either.

That said, we could use more exchanges like this in the media. Finally, we saw a real discussion — albeit for only a few minutes — about the best ways to tackle the problems with the faith. As Zakaria probably knows, the percentage of Muslims is growing along with the population.

And cancers can spread pretty damn fast, too.

***Update***: It’s worth noting, as reader Greg points out, that Zakaria mentioned Indonesia an example of a country filled with moderate Muslims, even though that country has plenty of problems of its own with extremism.