Two Creationists Joke About Atheists’ Focus on God, Not Realizing It’s Because of People Like Them April 10, 2015 Hemant Mehta

Two Creationists Joke About Atheists’ Focus on God, Not Realizing It’s Because of People Like Them

This video is incredible.

It begins with a six-minute discussion in which Creationist Ken Ham and American Family Association President Tim Wildmon complain about how Christians are totally persecuted these days. Example? These two gay guys recently asked a baker to make them a wedding cake. And they presumably offered money for her services. And she said no because gay people are abominations. And the state said she can’t do that. CAN YOU BELIEVE IT?!

But then, the two of them got off script for a bit and started riffing on the Freedom From Religion Foundation and atheists in general (around the 6:13 mark). 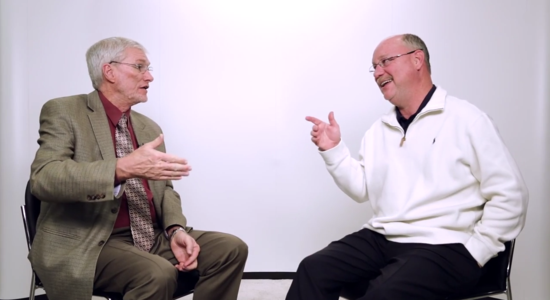 Wildmon: I’ve always been interested in… how can you be aggressive if you’re an atheist? Why do you get up in the morning and care?

Ham: I mean, ultimately, the whole universe dies, and they die, and no one even knows they ever existed, so why do they care about what we do?

Wildmon: Who was it, somebody said, you know, the atheist’s motto is “God doesn’t exist and I hate Him.”

Ham: Somebody once said about Richard Dawkins, “Why does he spend so much of his time fighting against someone he doesn’t believe exists?”

Wildmon: If you’re talking about Santa Claus, really, you want me to go around to universities and debate Santa Claus? I mean, if you view God as mythical like [Dawkins does].

Ham: I tell you what it does show you, though. It illustrates Romans 1, where it says those that rebel against God, reject him, they suppress the truth.

Ham: I sort of look at it this way: If it wasn’t a spiritual issue, they wouldn’t care. But because it’s a spiritual issue, and they know, what they’re really doing is, they want to be their own god — Genesis 3 — that’s the temptation… and so they’re really putting their hands over their ears, their hands over their eyes, I refuse to see, I refuse to hear, and they suppress the truth to try to convince themselves it’s not true.

They honestly can’t understand why atheists complain so much about a God they don’t believe in even though they just spent several minutes before this segment explaining the disastrous effects of religious belief. That’s what groups like FFRF are focused on. They’re not interested in suppressing Christianity. They just don’t want the government promoting it. They don’t want Christians to get special rights that other groups don’t receive. They don’t want non-Christians to get the short end of the stick.

Ken Ham lost his tax incentive, not because his Noah’s Ark theme park is pushing a Christian worldview, but because the for-profit business running the park was discriminating in hiring (and taxpayer money can’t be used on companies that discriminate). He still doesn’t get that.

To Wildmon’s point, atheists fight for LGBT rights because many Christians believe they should be allowed to discriminate against gay people due to their interpretation of certain Bible verses, even though they run public businesses.

Atheists care about God because belief in the supernatural world has consequences in the real world. Those consequences are bad for our government, hurt our friends and family members, and put us in a position where evidence-based reasoning takes a backseat to faith-based ignorance.

And these presumptuous jerks think atheists should just shut up since we’re all going to be dead eventually.

April 10, 2015
Hey, IRS, Where Are You? Watch This Wisconsin Preacher Tell His Congregation How to Vote on Election Day
Next Post