Hey, IRS, Where Are You? Watch This Wisconsin Preacher Tell His Congregation How to Vote on Election Day April 10, 2015 Hemant Mehta

Hey, IRS, Where Are You? Watch This Wisconsin Preacher Tell His Congregation How to Vote on Election Day

Tuesday was election day in Wisconsin, and Pastor Fred Smith of the Watertown Community Church decided to remind the congregation of their civic responsibilities… by telling them exactly how to vote: 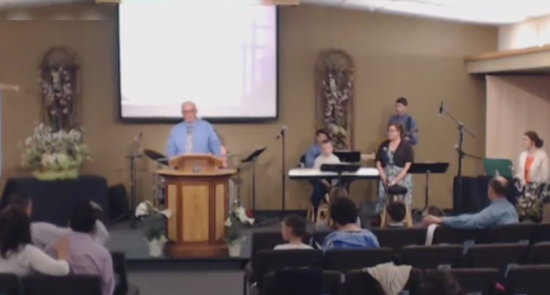 … What I put in your bulletin this morning is a handout… This is produced by the Wisconsin Family Council, which is a pro-family watchdog… On the Supreme Court election, there is a very liberal incumbent Supreme Court Justice out for re-election to a ten-year term. The person that is running against this liberal is a conservative circuit court judge from Janesville, and he is James Daley… Because judgeships are non-partisan, people are not able to campaign, taking positions on specific issues, but it’s very clear from Judge Daley’s statements and his record as an existing judge how much devotion he has to the federal and the state constitution. He is a strict constructionist. He is a judicial conservative, as opposed to Judge [Ann Walsh] Bradley, who is an extreme judicial liberal. The Constitution means whatever she thinks it is. Whatever that might be on any given day, God only knows. So it is important. So I encourage every Christian to go out and vote…

The IRS has everything it needs to revoke the tax-exempt status of this church. Pastors have every right to endorse candidates from the pulpit, but they’re not allowed to do that and pretend they’re a non-profit, tax-exempt group. But nothing will come of this, I’m sure, because the IRS has dropped the ball on prosecuting churches despite their promises to the contrary.

For a pastor who claims to care so much about the Constitution, it’s pretty clear he doesn’t give a damn what the law says.

By the way, that “liberal” judge, Ann Walsh Bradley, easily won re-election over her conservative opponent.

(via Crooks & Liars. Thanks to Malinda for the link)

April 10, 2015
Another Conservative Group Sues IRS for Not Explaining How the Agency Will Handle Politician-Endorsing Churches
Next Post