Well, this is different.

Atheist Ireland, a group that’s best known (to me, anyway) for working to repeal the nation’s blasphemy law, has issued a formal denouncement of blogger PZ Myers. 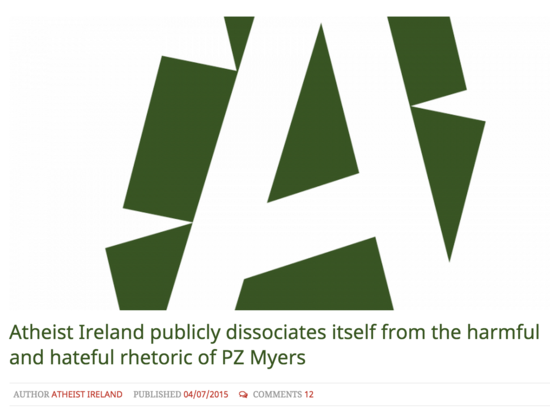 Atheist Ireland is publicly dissociating itself from the hurtful and dehumanising, hateful and violent, unjust and defamatory rhetoric of the atheist blogger PZ Myers. The final of many, many straws were his latest smear that Ayaan Hirsi Ali is ‘happily exploiting atrocities’, and his subsequent description of Atheist Ireland’s chairperson as ‘the Irish wanker’. We are also asking all ethical organisations and individuals to consider how you can help to reverse his harmful impact on both individuals and the atheist movement generally.

Atheist Ireland has previously given PZ Myers public platforms in Ireland, both at the World Atheist Convention in 2011, and at our international conference in 2013 on Empowering Women Through Secularism. We now apologise for doing this. We believe his behaviour is unjust to individuals, increases prejudice against atheists, and is harmful to the promotion of an ethical society based on empathy, fairness, justice and integrity.

There’s a litany of Myers’ own words included in the statement and, if you’re not familiar with him, it’s not a pretty collection. For Myers, it’s not enough to merely say someone is wrong or to point out the problems with their arguments. He has to insult and embarrass them, too, even if the differences in opinion are relatively minimal. (I’ve often been on the receiving end of his tirades.) When the comments are compiled together, it’s no wonder Atheist Ireland wants nothing to do with him. (Alex Gabriel has reposted the statement with links to where Myers said all these things so you can judge them in context.)

I thought this section hit home, at least in my experience:

Many within the atheist movement have been concerned about his behaviour for years. Some have responded by publicly ignoring it, either to avoid giving him the credibility of a response, or to avoid becoming his next target. Some have responded by attacking him back using similar rhetoric, thus adding to the problem and enabling him to deflect attention away from his own behaviour. Some, including Atheist Ireland, mistakenly believed that privately asking him to change his behaviour might eventually be productive.

I get why people would rather avoid him. If you ever wanted to push back against something he said, it wasn’t just one guy with a blog you’d be upsetting. It’s a guy whose response would be over the top, whose blog has a large and dedicated following, and who acts as an accelerant for his often-anonymous and even more aggressive commenters.

At one point, years ago, I wrote a blurb endorsing his book… and then not long after that, I just wanted less and less to do with him and his brand of activism. That was disappointing on a personal level, since I looked up to him so much when I started blogging. I know there are people who see the entire Freethought Blogs network as an extension of him, which isn’t true, but it’s a reason they avoid the other bloggers there, which is unfortunate.

To some extent, a lot of people have dissociated from him, albeit not formally like this. I don’t know how many hits his site gets these days, but I know that I follow news stories about atheism almost obsessively, and I just don’t see him quoted very much. It happens on occasion, sure, but not nearly as much as some others who have become go-to people for reporters needing statements or activists who are leading the way for political/social change. Whatever influence he once had seems to have diminished as his rhetoric worsened and he began lashing out at people who outsiders to the movement would probably consider his allies.

Okay… so back to Atheist Ireland’s statement. What does it even mean, practically speaking? What will change as a result of the group’s denouncement, since Myers didn’t have a formal relationship with Atheist Ireland to begin with? Does it just mean he won’t be invited back to Ireland by that organization?

I posed those questions to Michael Nugent, AI’s Chairperson, who has been writing about Myers on his personal website for a loooooong while now. (For that reason, I also wanted to know if the group’s statement was really just his doing, since that was my initial reaction.)

To that end, Nugent told me this isn’t just him:

And what will change on a practical level?

[Myers] used to be high on our list of people to invite to speak at international events that we were hosting, and we also invited him to speak at a meeting in Dublin before those.

But our dissociating ourselves from him is about more than that.

It also forms part of the international discourse in the atheist movement, about where we want to go and how we want to get there.

We would like people to see how desensitised some of the atheist movement has become to dehumanising, hateful, violent, defamatory rhetoric.

We would like people to endorse the importance of civil robust discourse, based on challenging ideas and behaviour rather than attacking people.

We would like people to endorse the importance of ethical standards of reporting when blogging.

Ideally, we would like people to focus more on actually doing work to advance ethical secularism, rather than just attacking people who are doing that work.

Nugent added that Atheist Ireland isn’t trying to tell other groups what they should or shouldn’t do:

But we do think that it is time that atheist and secular advocates address this issue by voicing their own opinions, rather than ignoring it or reporting on it as passive observers.

We know various people who share our views but who, for various reasons, have been reluctant to speak out. We hope this may give them some encouragement to speak out also.

Like I said earlier, that wouldn’t surprise me. I still reached out to the leaders of various American atheist groups yesterday asking if they had any reaction to the statement. Were they going to take a similar step and join in dissociating themselves from Myers? Or did they not want to comment, perhaps, as the statement suggested, to “avoid becoming his next target”?

Not a single one offered any response. (Not publicly, anyway.)

As for Myers himself, he responsed on Twitter with a sarcastic “Oh no! I’ve been disowned by the slymepit!”… in other words, associating Atheist Ireland with an online forum that frequently criticizes and mocks him and is populated by people he deems trolls (even though they correctly uncovered plagiarism on his blog network). In other words, he didn’t care.

April 8, 2015 A Helpful Guide to Coming Out as an Atheist When You're African-American
Browse Our Archives
What Are Your Thoughts?leave a comment