A Helpful Guide to Coming Out as an Atheist When You’re African-American April 8, 2015 Hemant Mehta

A few months ago, Openly Secular released a guide to surviving the holidays as an atheist. Now they’ve followed that up with a helpful guide to coming out as an atheist when you’re African-American. 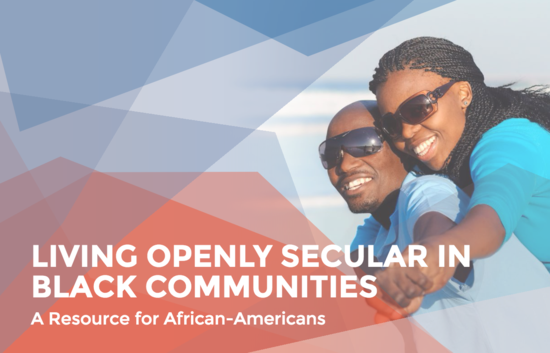 Why is that resource any different from a more generic “coming out” manual? Because there are challenges inherent to being black (or part of any minority group, really) that makes coming out as an atheist even harder. For example, saying no to religion when you’re black is often interpreted as a slap in the face to your whole culture.

Jamila Bey, an outspoken black atheist herself, is quoted in the guide saying how that shouldn’t have to be the case:

“African Americans have allowed the story to be told that we are a God-fearing people. Our culture dictates — mandates, even — that we be spiritual. Accepting that definition of who we are forces us to defend our blackness should we have doubts about spirituality. [Accepting that definition means accepting that to be] authentically black is to be religious, wrongly, and that to doubt God is a white thing — wrongly. We let others define us, and we dare not buck that expectation.”

The guide also includes a list of ways to reduce secular stigma in the black community, such as examining the “costs of religiosity on… African Americans, and black women in particular.”

Check out the full document here. If you have any suggestions for how to make the guide better, please let them know in the comments.

April 8, 2015 How Do Our Behaviors Evolve Into Instincts?
Browse Our Archives
What Are Your Thoughts?leave a comment