In 2013, David Powers King and Michael Jensen were in the final stages of publishing their young-adult fantasy novel Woven when they saw a mistake on the back cover.

The biographical information for King was fine, but Jensen’s was missing this line: “He lives in Salt Lake City with his boyfriend and their four dogs.”

The Acquisitions Editor for publisher Cedar Fort, Inc. told him the reason in an email: 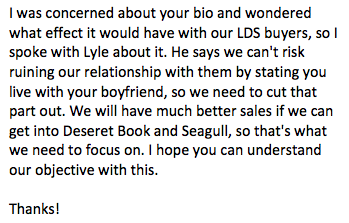 I was concerned about your bio and wondered what effect it would have with our [Mormon] buyers, so I spoke with [Cedar Fort owner] Lyle [Mortimer] about it. He says we can’t risk ruining our relationship with them by stating you live with your boyfriend, so we need to cut that part out.

Jensen suggested replacing the word “boyfriend” with “partner” (which is what his bio said in the book proposal) but the publishers would have none of it. They didn’t want to publish even a hint that one of their authors was gay. They cater to an LDS audience, after all, and they obviously didn’t want to burn any bridges.

The authors (rightly) refused to budge any further with the bios, so there was a phone call to discuss the situation, which the authors have summarized like this on their website:

Mr. Jensen called Cedar Fort‘s owner, Lyle Mortimer, and asked why he was being treated differently from Mr. King. “The conversation really devolved quickly,” says Mr. Jensen. “Lyle started yelling about my ‘agenda’ and how I was trying to destroy families. He even started saying inappropriate things about how God had given me a penis for a reason. It was very uncomfortable. Then he threatened to publish Woven without our names attached or without our bios at all — rather than print that one sentence. He told me that if he decided not to publish because of this, I‘d have to buy back the rights to our book and reimburse him for his work so far, and that would cost me thousands of dollars.”

Jensen argued that bending over backwards like this to try and appease a Mormon book chain, even for a publisher that caters to an LDS crowd, really made no sense:

… I would imagine that major national retailers, like Barnes & Noble and Amazon.com, might hesitate to continue dealing with a publisher whose practices are so egregiously incongruous with their own adopted corporate philosophies on the subject of gay equality (I’m sure you’re aware that last year Jeff Bezos personally donated $2.5 million dollars in support of same-sex marriage in Washington state).

So the authors bought back the rights to their book and began looking for a new publisher.

It turned out their controversy received a lot of media coverage and, along with it, interest from other publishers. They eventually struck a deal with Scholastic Press, a company that knows a little something about books. (To be clear, the controversy may have led to publicity, but the story itself is what led to the book deal.)

That book is now available in stores and online, but if you look at the book jacket, Michael Jensen’s bio still doesn’t mention his boyfriend.

It doesn’t mention his “partner” either… 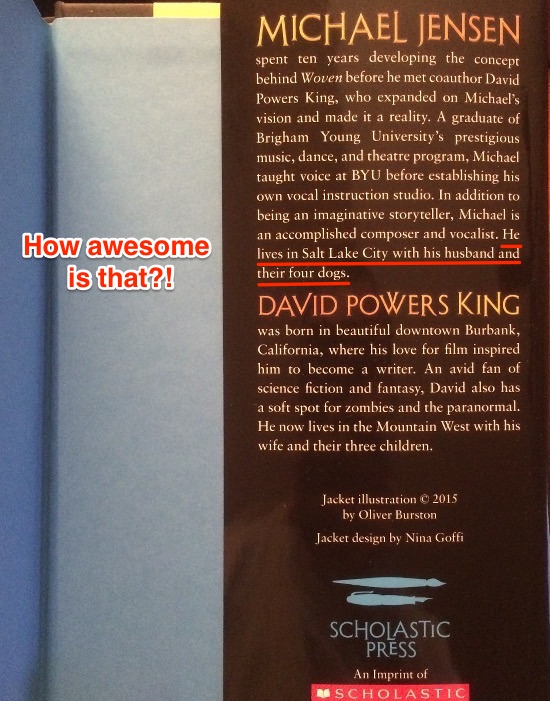 Congratulations to the new couple 🙂

And congratulations to both authors for finally getting this book published — on their terms. The feedback on Amazon is overwhelmingly positive, so if you’re looking for a fantasy book that your kids will enjoy, Woven looks like one you’ll want to check out.

April 7, 2015
Vani Hari, the "Food Babe," Doesn't Know What She's Talking About, Says Scientist Who Does
Next Post

April 7, 2015Huffington Post Laughably Explains How to Redecorate Your Home According to "Local Space Astrology"
Browse Our Archives
What Are Your Thoughts?leave a comment