A Glimpse Inside “Atheist and Secular Oklahomans Day” at the State Capitol Building April 7, 2015 Hemant Mehta

Yesterday, several non-theistic groups held the first-ever “Atheist and Secular Oklahomans Day” at the State Capitol Building, urging legislators to base their decisions on secular, not religious, grounds. (Because who wants to emulate Indiana?)

They set up an “Ask an Atheist” table; handed out information about their groups, their demographics, and what they wanted from politicians; and spoke to legislators. In other words, they held an event that local groups could copy in just about every state. (*Wink wink nudge nudge*) 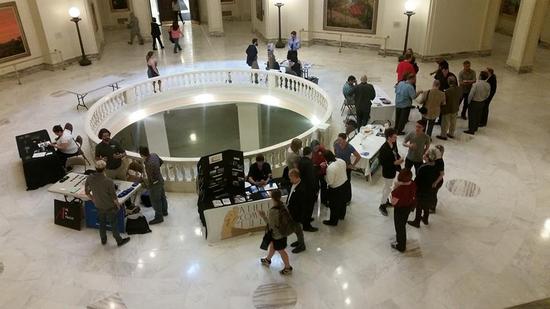 Melissa Miller, President of the Atheist Community of Tulsa, told me via email why this event was so necessary:

The purpose of our lobby day was twofold. First, we wanted to let our politicians know that nonreligious Oklahomans exist in relatively large numbers, we’re tax-payers, we vote, and no longer wish to be the ignored minority in the state. Oklahoma is a very strongly religious state, and I know from personal experience that many people here see atheists as almost mythical creatures, not realizing that we are their coworkers, friends, and family. Oklahoma has advanced multiple bills that trample over the separation of church and state, and we are finally stepping up to make our presence known and to ask our lawmakers to consider ALL of their citizens when they govern.

The second purpose was to make other Oklahomans aware of us, both those who are religious and those who aren’t religious but were not yet aware of our many local support groups and activities.

I spoke with several legislators and members of their staff concerning my objectives. Some were agreeable and even glad we were at the Capitol for this purpose. Others could barely hide their disdain. This reaction wasn’t particularly surprising given the political climate of Oklahoma; however, this apathy made me acutely aware of my own and I vowed to become more vocal for our community, especially for the ones who cannot have a voice due to family, friend, and job concerns.

Atheists can certainly have a voice in Oklahoma, but it will take all of us pulling together to make our wishes known.

Finally, William Poire, regional director for American Atheists, put this all in perspective:

Before I was an atheist, I was an Oklahoman. Born and raised in the Sooner State, I have equally contributed my services, taxes, and talents to our society. And yet, I have watched, with my fellow Oklahomans, the divisiveness and discrimination caused by an unnecessary entanglement of religion and government.

And so while I may find no middle ground with my theistic counterparts, we do share a common ground: that a secular government representing its people of all faiths, genders, ages, ethnicities, races, etc., operates most effectively. While the “nones” are the fastest growing minority demographic in Oklahoma (currently at 12 percent), we are joined by even our religious friends in this effort.

Today was not a challenge being waged by atheists against Christians but rather “we the people” against a government overstepping their constitutional bounds. It is the patriotic burden of every American to petition the government for redress of grievances. That many of us identify as atheists is of little to no consequence. We are citizens and we demand equal, respectful, and inclusive representation.

Based on the local coverage of the event, it was clearly a success on the publicity front, though the real question is whether it’ll lead to any changes with legislation. That’s not likely, but Miller said they planned to make this an annual event. It’s a little tougher to vote for pro-religion legislation when atheists are right there in front of you.

Kudos to the group leaders, Allison Spicer of ACT, and everyone else who helped organize this event, setting an example for groups across the country.

April 7, 2015
Baptist Pastor Reminds Congregation: "This is a Man's World!"
Next Post