A few days ago, I posted about how Pittsburg High School (Texas) baseball coach Tommy Stewart not only conducted Bible studies with his players after practice once a week, he also punished those who didn’t attend by making them run for 20 minutes.

According to a letter to the school district from the Freedom From Religion Foundation, there was even more evidence of his attempts to push Jesus on his team:

We further understand that Coach Stewart shows religious videos to his players, including the movie God’s Not Dead and videos from the Kingdom Man ministry series. Additionally, we understand that the team’s official practice uniforms have the bible quote “With GOD all things are possible” printed on them, from Matthew 19:26…

The community has, not surprisingly, defended Stewart throughout all this. They don’t care if he’s illegally pushing Christianity because they’re predominantly Christian and oblivious to how the world works outside their bubble.

I’ve been in touch with a reader with close ties to the community. She’s pointed me to even more evidence of the district not giving a damn about this problem.

First, there’s this video from Thursday night which was posted on Facebook:

That’s the varsity baseball team taking off their uniforms before the game to reveal the “godly” shirts. They put back on the official uniforms for the game, so I’m not suggesting it’s illegal, though my contact told me the junior varsity squad wore the “godly” jerseys during their entire game, as did the coaches during the separate girls’ softball game that day.

There’s also a picture of Coach Stewart wearing the “godly” shirt himself during the game: 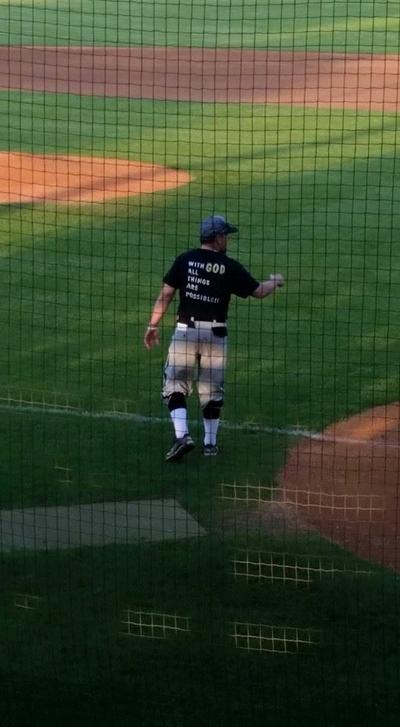 All of that is certainly illegal. (So don’t be misled by anyone who says this is purely a student-led action.) My contact also told me one of the baseball coaches sent the students a text message urging them to wear those “godly” shirts in support of Coach Stewart… before covering his own ass by sending a follow-up message that essentially boiled down to If you want to, that is. (I was unable to obtain screenshots of those texts to verify this.)

The Facebook page for the baseball team — which claims to be unaffiliated with the district, even though it’s the only page of its kind for the team — also featured this image over the weekend:

And there’s this sign which the school has left up:

Not all of this is illegal. But it’s part of a broader point: Good luck being an atheist on that team. Or in the district. Good luck being anything that’s not Christian, really. Maybe next year’s practice jerseys should just say “Jews Not Welcome Here” since that’s the vibe they’re giving off, anyway.

No one is trying to attack Christ. We’re simply asking for the school to remain neutral on matters of religion. That means coaches, teachers, and administrators have to refrain from promoting their religious beliefs, whatever they are, while on the clock. This is all part of the problem. There’s a pervasive belief, it seems, among adults in the district that promoting religion in school is perfectly normal. They see it as their right and all attempts to make them stop are examples of Christian Persecution.

It’s time for district leaders to take real action before a lawsuit is filed. But considering that the superintendent already expressed her support for Coach Stewart despite all the evidence that he’s illegally pushing faith on students, I have little hope anything will change unless someone takes this district to court.

April 6, 2015
Atheists Aren't the Most Hated Religious Group in Canada, According to New Survey
Next Post

April 6, 2015 Indian Atheist Requested the Constitution Instead of the Bhagavad Gita When Taking Oath, but the Judge Said No
"That's the plan, and it works from their pov. The church gets to damn the ..."
Karl Dubhe IV “Modest is Hottest” Isn’t the Lighthearted ..."
"Missed the fun of making fun of this one looks like she frequents Newser and ..."
Thomas Grove Evangelist Robin Bullock: God Spoke To ..."
"We weren't allowed to talk about being Atheists Because my Dad was afraid of losing ..."
AmyCharton The Good and Bad News About ..."
"But hæh??? I must be logged in to upload an image? Why does my avatar ..."
SiwHa A Pastor Says He’s a HS Football ..."
Browse Our Archives
What Are Your Thoughts?leave a comment