Last month, when former Congressman Barney Frank was promoting his new memoir, we found out that he didn’t consider himself an atheist (contrary to what he had suggested in the past).

Today, in a video for Big Think, Frank offered this advice to atheists interested in winning political office: Stop using the A word.. 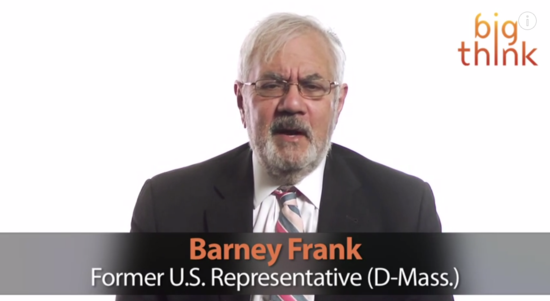 Well, the problem with atheism, politically, starts with the phrase. I have advised people who are themselves non-believers, not to use the word atheist. It has a harshness to it. It is a repudiation, not necessarily literally but it comes across as a repudiation of religion and religion is very important to many people. It’s a source of good feelings for many of them. It is not always, unfortunately, a motive for good behavior.

I have noted that in the international situation, religion is sadly more often a cause for people to shoot each other then to help each other. When you get splits within two countries or even within countries where it’s Catholics versus Protestants, Jews versus Muslims, Buddhists versus Muslims as it has been in Myanmar, Hindus versus Muslims, there’s a very sad extent of that. But religion is important to people. It has a history of being seen as a source of good behavior. America’s history has given religiosity a greater role than some other places.

And from the politician’s standpoint the question is why pick a fight that doesn’t have to be waged? I never expressed the fact that I was not a believer in any theistic approach because it was never relevant. I did fight very hard throughout my 40 years in elected office to prevent rules and laws that put nonbelievers at a disadvantage. I’ve fought very hard against the establishment of religion, against people being forced to subscribe to religious views to get certain benefits, et cetera. But beyond that it didn’t come up.

In my own case there was another reason why I didn’t talk about it, I’m Jewish. Obviously there’s a strong terrible history of persecution of Jews. Judaism is a religion, but it is also an ethnicity. And for many of us who are Jewish in America today it is the ethnicity more than or even to the exclusion of religion that identifies us. But for me to have, when I was a public official I was the first Jewish person to be elected to the Congress in the United States since 1884. It would’ve looked as, or to some people it could have been distorted to be a kind of I’m separating myself from the Jews and I wouldn’t want to do that. Even today, as secular as I am, when the high holy days of Yom Kippur and Rosh Hashanah come up, I am not going to be seen in public doing things that other Jews won’t do for religious reasons. I don’t observe them myself in a religious way, but I would not want my behavior to be used to embarrass or discomfort anybody who does religiously follow them.

Practically speaking, there’s no argument. He’s right. Atheism is a political liability even if you’re an otherwise great candidate. And I don’t think anyone should run for office primarily identifying as an atheist. You’re not running to become an atheist leader, after all; you’re running to become a leader who happens to be an atheist. There’s a difference.

The problem I have — it’s more of a theory, I guess — is that some politicians who are already in office, who win elections time after time, who are as politically safe as they can be still don’t admit their atheism. Surely, in Congress, someone doesn’t believe in a higher power. Even at the state level, there are only a handful of openly-atheist public officials.

Maybe that would change if more current politicians admitted they were atheists and more wannabe politicians didn’t run away from the word. I’m encouraged by the recent Congressional campaign of James Woods. Even though he didn’t win, he never shied away from his Humanism, and he didn’t lose because of that.

Nothing’s going to change if politicians who don’t believe in God keep that in the closet.

So I understand what Frank is saying on a practical level. But if we want a government that fights for separation of church and state and makes decisions for rational, rather than faith-based, reasons, you would think that politicians admitting they’re not religious would be an easy first step, especially for those, like Frank, who really have nothing to lose.

There’s also this assumption in Frank’s statement that saying you’re an atheist implies you want to trample over religious freedoms or push the phrase “under no God” in the Pledge of Allegiance. Obviously, neither is true any more than Christian politicians automatically want to legislate their beliefs. We can’t combat that stereotype, though, if no one’s willing to begin that discussion by using the label.

April 6, 2015
Indian Atheist Requested the Constitution Instead of the Bhagavad Gita When Taking Oath, but the Judge Said No
Next Post

April 6, 2015 Friendly Atheist Podcast Episode 49: Jason Heap, Executive Director of the United Coalition of Reason
Browse Our Archives
What Are Your Thoughts?leave a comment