For Easter, a Flying Spaghetti Monster Display Went Up in the Wisconsin State Capitol Building

Late last year, the Atheists, Humanists, & Agnostics at the University of Wisconsin-Madison discovered that anybody could put up a display in the State Capitol Building as long as they filled out the proper paperwork.

So to counter the Nativity Scenes around Christmas, they put up signs honoring gods from Game of Thrones.

The same thing happened last week. The Freedom From Religion Foundation put up signs saying “In Reason We Trust” (which were then stolen) to counter some Easter-related displays.

And the college students, not to be outdone, received permission to put up this poster: 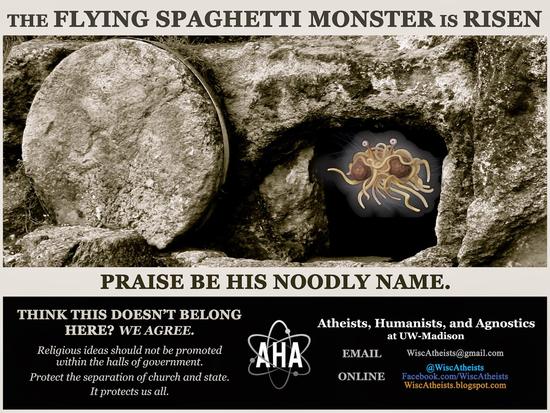 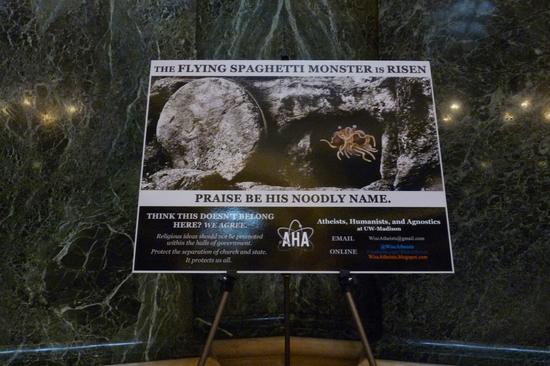 Hail to the Flying Spaghetti Monster!

To anyone who thinks it’s disrespectful, be sure to note the words at the bottom:

Religious ideas should not be promoted within the hall of government.

Protect the Separation of Church and State. It protects us all.

The group put up a similar display in late 2013. They also issued this formal statement about their intentions:

According to AHA President Sam Erickson, the intention of the display is not to mock religious believers, but rather to advocate for the separation of Church and State. “We want to draw attention to the ridiculous public forum system in the Wisconsin State Capitol which allows religious displays to enter the halls of government,” Erickson explained in a statement. “We would prefer that our Capitol remain secular, and hopefully the absurdity of our display will make people question whether the Capitol is an appropriate place for promoting religious views.”

I love the approach. If the government is going to allow religious groups to promote their beliefs, then atheists can (and should) do the same, even if it is in mockery.

The ideal situation would be for the government to say no to all outsider group displays, but until that happens, RAmen to all.

April 6, 2015 On Easter Sunday, Several Nevada Churches Were Vandalized with Anti-Christian Messages
"Too bad they let their Exorcist Support Contract lapse so they'll have to go out ..."
SltryPrNstyBrtsh&Shrt A Capitol Rioter Was Arrested After ..."
"He probably thought that everyone in his church group thought like he did and so ..."
Rob P A Capitol Rioter Was Arrested After ..."
"What a fossil."
SltryPrNstyBrtsh&Shrt Christian Blogger: Moms Should Stop Working ..."
"It’s not a nationwide danger. It’s a global danger."
Synfandel TN Health Official: GOP Governor’s Christianity ..."
Browse Our Archives
What Are Your Thoughts?leave a comment