If you weren’t in Memphis over the weekend, you can catch Ayaan Hirsi Ali‘s keynote address from the American Atheists convention below: 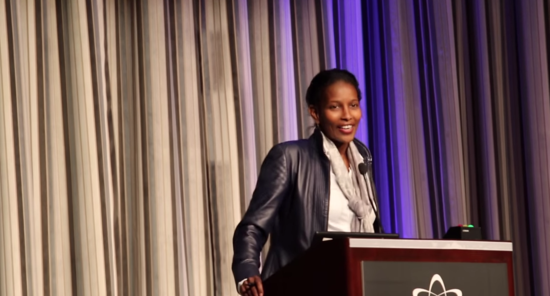 I’ve seen complaints online about how Hirsi Ali was minimizing problems caused by conservative Christians, as if they weren’t as big a deal as those caused by extremist Muslims. PZ Myers called it “fatwah envy” and said Hirsi Ali was suggesting “we should meekly accept the lesser injustice because of the threat of the greater” and trying to “silence those who strive for respect and dignity in their lives.”

But when I watched her speech (because I actually did that instead of relying on a couple of sound bites and tweets), I didn’t get that impression at all.

What I saw was a woman (with a lovely sense of humor, by the way) talking about her own experience, and pointing out the fact that extremist followers of Islam, not Christianity, are a bigger threat to the world at large. And she’s right.

Through her examples, she compared the religious concerns we often deal with on a regular basis with those we may not understand because of our geography. We’re undoubtedly familiar with LGBT-rights issues in the U.S., but she wanted to call our attention to injustices perpetrated by people in the name of Islam — injustices she’s all too familiar with.

I understand, I empathize, and you have my support in fighting religious bigotry. And in Christian America, there’s probably a lot to do. But I want to draw your attention to a different kind of religion. If you become a Christian apostate, the highest price you’ll pay is that your family, your neighbors, your communities will disown you. And trust me, I understand that pain…

Yet given the limited resources we have, the limited time we have, and the potential energy and force and magnitude and resources of the Islamic threat, I wanted to draw your attention to the religion that threatens us the most in 2015.

If you are gay, today in the United States of America, the worst the Christian community can do to gay people is not serve them cake… I tweeted Tim Cook, the CEO of Apple, whom I think is very brave by going out there and describing what it is that the LGBT community faces in predominantly homophobic communities. The discrimination is subtle, and it lurks in the shadows. But I just want you to think about being Muslim and gay today. In the worst case scenario, you’ve seen it on television, on YouTube… if you’re accused of being gay, you are marched to the tallest building in town and bullies throw you off that building and there’s a crowd of people waiting there…

At no point did she say we should not fight for LGBT rights or women’s right or any other kind. She unequivocally voiced her support in those fights. But while she had the podium, she wanted to remind us of a threat that is taking life away from people instead of just making it more difficult. (I will point out that LGBT people have been killed and driven to suicide through bullying, so not getting cake is hardly the worst thing that could happen to gay people. But I would give her the benefit of the doubt here since it seems apparent to me she was just using a rhetorical device.)

Only through a completely uncharitable interpretation of her words would anyone think she doesn’t care about LGBT people or that she was minimizing their experiences. She was talking about a religion and culture that she knows very well and trying to get the audience to experience that faith through her eyes.

There was one line near the end, though, that might suggest otherwise (at the 44:26 mark):

Let’s stop going after Christians and Christianity. Let’s go after Islam as the most threatening doctrine of our time. Let’s ask them those questions that we put to the other religions.

I think Michael Nugent of Atheist Ireland nailed it here with his commentary:

… a charitable interpretation of her final line would include an implicit “disproportionately” after the phrase “Let’s stop going after Christians and Christianity.” She may well have clarified what she meant in more detail if she had more time, as she introduced this point by noting that she had less than a minute left to speak.

When you listen to the speech in full, she made it very clear that there are problems caused by Christianity worth fighting against — and which she supported. But in terms of life and death, there’s another religion that’s worse.

You should take an hour of your time to watch the whole thing.