Atheists Aren’t the Most Hated Religious Group in Canada, According to New Survey April 6, 2015 Hemant Mehta

Atheists Aren’t the Most Hated Religious Group in Canada, According to New Survey

When it comes to public perception of atheists in the U.S., we usually rank pretty low. In a 2008 survey, only Scientologists had a lower approval rating. And we know we’re at the bottom of the list when it comes to electability.

But that’s not the case in Canada.

A recent survey done by the Angus Reid Institute and Dr. Reginald Bibby of the University of Lethbridge found that atheists are not nearly as hated up north! 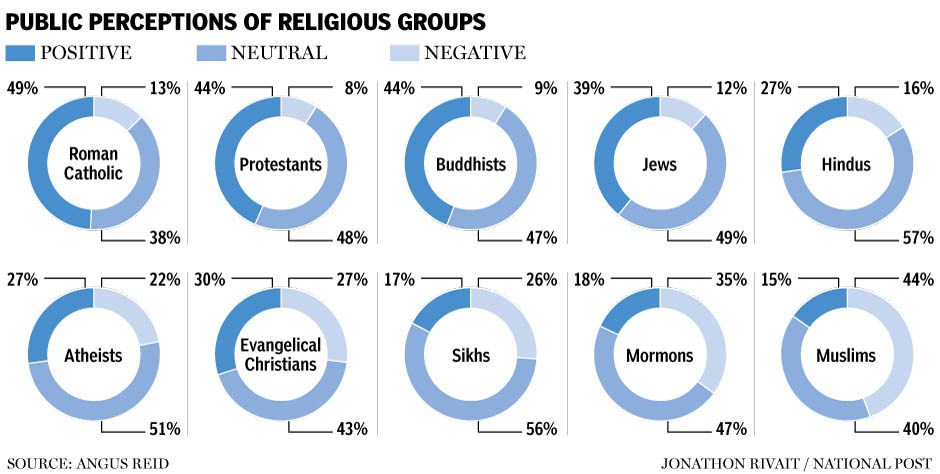 When it comes to public perception, 27% of Canadians have a positive image of atheists — higher than several religious minorities — and only 22% of them have a negative view of us. (Evangelical Christians, on the other hand, have 27% disapproval.)

Furthermore, roughly the same percentage of people are inclined to reject religion (26%) as they are to embrace it (30%), as you can see in the graphic on the left: 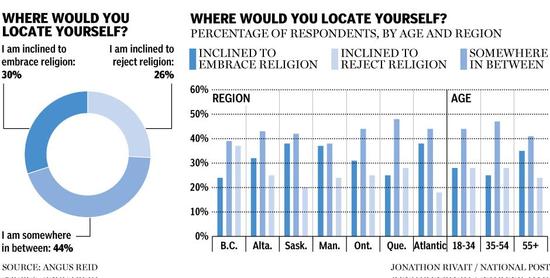 You can also look at it in another light. Is the growth of atheism good for Canada? Among those who embrace religion, the answer is obviously no, with only 10% of that group agreeing with the statement. But among those who reject religion, 68% thought the growth of atheism was good. (Which is weird… I mean, who rejects religion but thinks more atheism is a bad sign?)

Overall, though, a third of Canadians felt more atheism in society was a good thing. That’s worth celebrating. It could be much worse.

You can read the full report here with snazzy graphics at the National Post.

April 6, 2015
Arkansas Methodist Church Told It Can't Participate in Easter Parade, Likely Due to Its LGBT-Affirming Stance
Next Post