Arkansas Methodist Church Told It Can’t Participate in Easter Parade, Likely Due to Its LGBT-Affirming Stance

The city of Eureka Springs, Arkansas was home to a huge “Celebrate Jesus Easter Parade” this weekend with several local churches taking part in the annual festivities.

But representatives from the Eureka Springs First Methodist Church were told they couldn’t participate even after being accepted initially.

Take a wild guess why…

Church member Suzie Bell believes it’s because of their stance on the LGBT community.

“They wanted to know what our banner was going to say, and it said “Jesus loves all. They had decided that they did not want us in the parade, and that we weren’t welcome.” Bell said.

“It was based purely on our love and acceptance of the LGBT community.” Bell said. 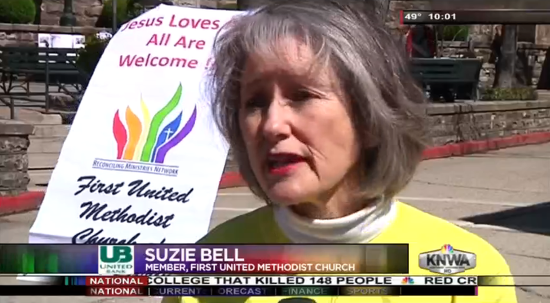 A local news station asked Parade director Laura Nichols for the official reason the church was denied, and her response was embarrassing in its emptiness:

This day isn’t a day of pointing fingers or playing the blame game. This parade is to honor our Lord and Savior and for praising God for sending His only Son who willingly went to the cross, died and rose on the third day that when we repent of our sins and accept Him. We have the promise of eternal life with the Lord. But more that that He carries us each day that we are on this earth. We are all sinners redeemed by the grace of God. We believe that the Bible is the un compromised Word of God inspired by the Holy Spirit.

Second, name one friend who’s gay. Just one. I promise you he thinks you’re an asshole.

More importantly, though, Nichols completely ignored the question. She didn’t give a response, probably because admitting the truth would be humiliating and she was hoping no one would make a big deal of it.

But that’s the state of modern day Christianity. It’s full of people who are holding on tightly to the last shreds of anti-gay bigotry. They won’t let go even after other Christians tell them it’s unacceptable. It’s pathetic, and it’s another reason no decent person should be a member of any of these anti-gay-rights churches. Until church leaders change their ways, don’t give them your time or money.

April 6, 2015 Atheists Aren't the Most Hated Religious Group in Canada, According to New Survey
Browse Our Archives
What Are Your Thoughts?leave a comment