Over the past week, I’ve written a couple of posts about the overreaching faith of Principal Albert Hardison of Walnut Hill Elementary/Middle School, part of the Caddo Parish Public Schools in Louisiana.

This is someone who openly praised God on the school’s website (he has revised it since the complaints began): 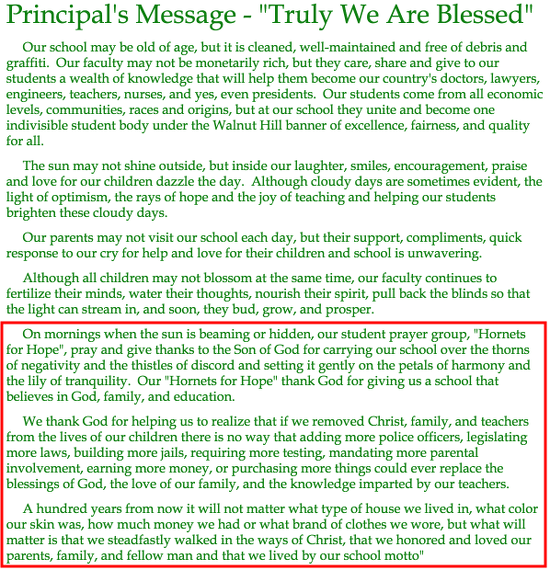 The same sort of message appeared in his newsletters to parents. 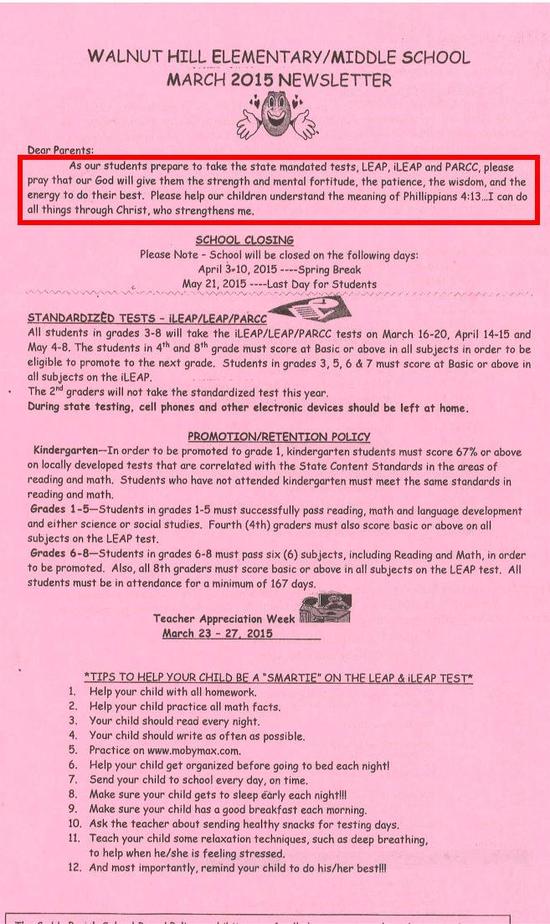 Anyway, attorney Royal Alexander wrote an opinion piece for the Shreveport Times in which he slanders atheists by saying they don’t exist in foxholes, praises Principal Hardison for “erring on the side of religious freedom,” and defends Indiana’s RFRA law… but what’s especially striking is that Congressman John Fleming (R-LA) made an appearance in the comments section: 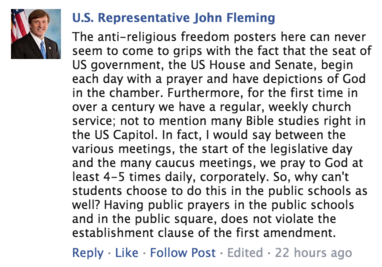 The anti-religious freedom posters here can never seem to come to grips with the fact that the seat of US government, the US House and Senate, begin each day with a prayer and have depictions of God in the chamber. Furthermore, for the first time in over a century we have a regular, weekly church service; not to mention many Bible studies right in the US Capitol. In fact, I would say between the various meetings, the start of the legislative day and the many caucus meetings, we pray to God at least 4-5 times daily, corporately. So, why can’t students choose to do this in the public schools as well? Having public prayers in the public schools and in the public square, does not violate the establishment clause of the first amendment.

I can’t believe I have to say this to a member of Congress, but students can already pray in school. It’s perfectly legal and church/state separation groups defend their right to do it.

What Hardison did is promote his faith from a position of authority, something that is illegal to do for reasons that would be obvious if we were talking about anything besides Christianity. Unlike members of Congress, who aren’t required to participate in any of those prayers, elementary school students should never be in a position where they have to ask permission to opt out of an assembly featuring a Christian rapper (something else Hardison promoted). It’s coercive for a school administrator to push religion — any religion — on the students, and the courts have repeatedly said so.

Of course, it’s not the first time Fleming has said something so ignorant. He once claimed that allowing Humanist chaplains in the military would mean they would stand over dying patients and say, “If you die here, there is no hope for you in the future.” The conservative Christian also said in opposition to medical marijuana — with no hint of irony — that “We hear anecdotal stories, and that’s how myths come about.”

April 5, 2015 Assumptions About the Creation of the Universe
Browse Our Archives
What Are Your Thoughts?leave a comment