Georgia Teacher Tells Students President Obama Isn’t a Christian and Neither Are Their Parents if They Voted for Him April 4, 2015 Hemant Mehta

According to NAACP chapter in Laurens County, Georgia, a middle school teacher was completely out of line with comments made to her class a couple of weeks ago. Dublin Middle School teacher Nancy Perry, who apparently teaches a class in Tea Party rhetoric, said of President Obama: 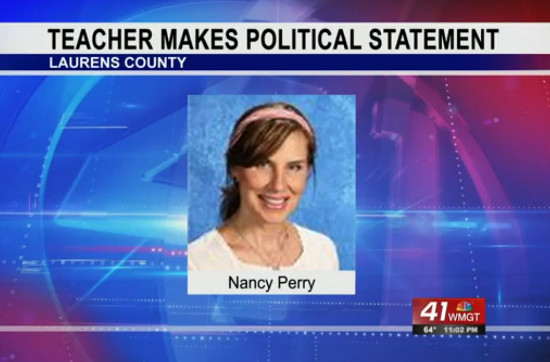 One of the 13-year-olds in the class told his parents about the incident and a meeting was set up with the teacher… but it turned out to also include the teacher’s husband (who sits on the school board and hosted a conservative talk radio show) and a representative from the school. (The NAACP has said Bill Perry‘s presence at that meeting violates the Southern Association of Colleges and Schools’ accreditation standards.)

And then things got worse:

… [Perry] presented to the parents a packet of several pages from a website that expressed her views on religion and politics. She was supported in this by her husband.

Ledbetter says he sent a letter to the parent on Thursday to let him know what action he took with the teacher. He is also considering requiring more sensitivity and diversity training for teachers, faculty, and staff.

The teacher at the center of this incident, Nancy Perry, tells 41NBC she was advised not to speak with the media. She did tell 41NBC what has been reported is “untrue” and she calls this an “unfortunate issue.” Ledbetter says Perry is still working at Dublin Middle School.

So the district is *thinking* about sensitivity training (which would punish all the good teachers by wasting their time) and Perry doesn’t seem to have learned anything from the incident. What exactly did the superintendent do? And what will be the punishment if Perry does something similar in the future?

We have no answers to those questions yet.

April 4, 2015
Christian Baker in New York Will Hand Out Cupcakes Near Gay-Friendly Bars Tonight in Show of Solidarity
Next Post

April 4, 2015 Creationist Josh Feuerstein's Attempt to Punish Baker Who Wouldn't Print Anti-Gay Message on Cake May Have Backfired
Browse Our Archives
What Are Your Thoughts?leave a comment