It’s already been established that you can’t expect a baker to write hateful anti-gay messages on cakes. If they say no, it’s fine, assuming they’re going to reject all hateful messages regardless of who’s asking for it.

But that didn’t stop another Christian from asking a baker to write “We do not support gay marriage” on a cake. She said no. He cried hypocrisy (because he doesn’t understand how saying no to all hate speech is different from rejecting a message of love specifically from gay customers).

What makes this story especially interesting is that the Christian was Josh Feuerstein the Christian loudmouth on YouTube who claimed to disprove evolution in three minutes (spoiler: he failed):

That same Josh Feuerstein called up Cut the Cake bakery in central Florida the other day, asked for the #HateCake, recorded the phone call without her permission, and posted it online, leading to harassment of the owners by Feuerstein’s followers. (He later took down the video at the baker’s request, but it was reposted elsewhere.) 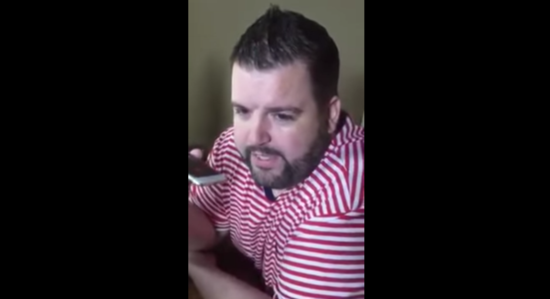 Due to the negative reviews and nasty messages from God-loving Christians, there has been a GoFundMe page set up to support the bakery.

Also interesting: Bakery owner Sharon Haller is weighing her legal options because recording phone calls without the consent of everyone involved is illegal in Florida.

So Feuerstein isn’t just a jerk. He’s a jerk who may be charged with a crime.

Maybe there is a god…

On a side note, Feuerstein ran a fundraiser last August asking for $20,000 to buy a professional video camera… and it was successful. When I inquired about the equipment in December, he told me (via email) that it was purchased… and then threatened me with a lawsuit if I said anything to the contrary.

So why the hell is he still shooting vertical videos with a phone?

(Thanks to Divy for the link)

April 4, 2015
Georgia Teacher Tells Students President Obama Isn't a Christian and Neither Are Their Parents if They Voted for Him
Next Post

April 4, 2015 The Candymen Canon
Browse Our Archives
What Are Your Thoughts?leave a comment