While much of the discussion and debate surrounding Indiana’s Religious Freedom Restoration Act (RFRA) law has been about how it would allow Christian business owners to freely discriminate against LGBT customers, there’s a broader problem with RFRA (at both the state and federal levels) that’s been ignored.

The law essentially says everyone has to follow the law… but if you have a really good religious reason to not comply, that might be okay. Want to break the law because you think it’s unjust? You’re out of luck. But if God factors into your decision, you might be able to get away with it.

It’s one of the biggest complaints from opponents of RFRA: It privileges religious beliefs over strong personal convictions and the government shouldn’t be making that call. To that end, the Freedom From Religion Foundation will be taking out this quarter-page ad in Sunday’s New York Times calling for a repeal of RFRA: 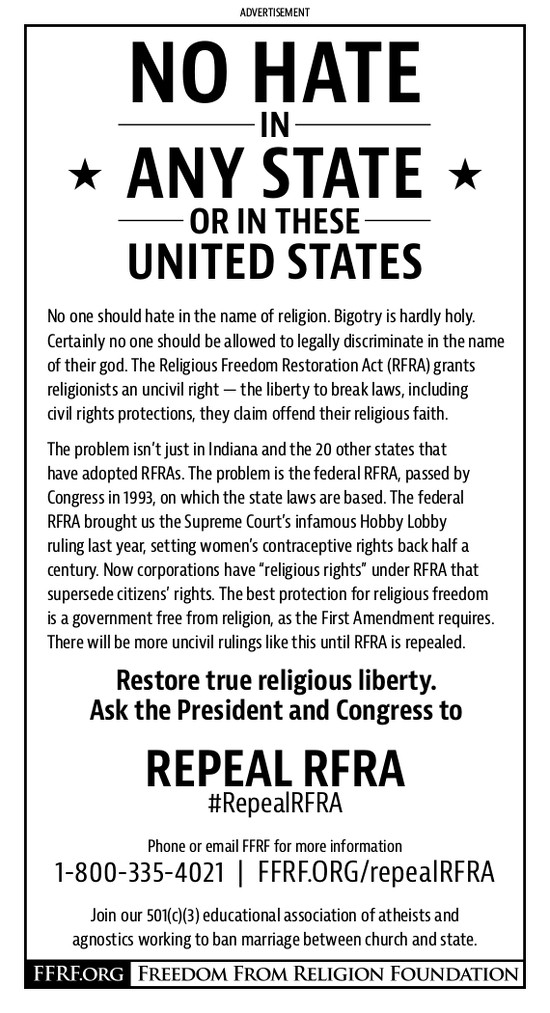 It’s an uphill battle, to say the least. RFRA has been around for more than two decades now and there’s no reason to believe it’ll be taken off the table. But it’s certainly worth discussing why religious belief (as opposed to any other sort of personal conviction) gets this special treatment.