We’re so used to hearing about high school football coaches illegally leading their teams in prayer, completely overstepping their bounds and putting students in the awkward position of joining in to avoid any consequences. But this story coming out of Texas is unique in just how far the district is going to push faith on the students.

Pittsburg High School baseball coach Tommy Stewart not only conducts a Bible study with his players after practice once a week, he punishes those who don’t attend with 20 minutes of running. There’s literally a consequence for not being Christian on his team.

According to a letter to the school district from the Freedom From Religion Foundation:

We further understand that Coach Stewart shows religious videos to his players, including the movie God’s Not Dead and videos from the Kingdom Man ministry series. Additionally, we understand that the team’s official practice uniforms have the bible quote “With GOD all things are possible” printed on them, from Matthew 19:26…

According to the person who informed FFRF of the problem, this is an issue for Christians, too:

“Most of the sermons they watch and the bible studies are Baptist in nature and they are forcing a Catholic student to sit through them.”

FFRF had some simple demands for the district to make things right:

Coach Stewart’s organization of and participating in bible study and religious discussions with his students directly violates the Constitution. We request that the District inform Stewart that the bible study sessions must end immediately and that he may not otherwise endorse religion to his players. The bible quotes on the team’s uniforms must also be removed…

Note that they’re not calling for his head on a platter, or even that he be fired as coach. They just want him to stop preaching when he’s supposed to be coaching.

When local media did more reporting on this story, the administration was adamant this was all a lie:

“He has about 30 boys and only 10 stay behind for a couple of sessions, so that tells you right there that it’s not mandatory.” Pollan explained. “He may show a movie or do studies on different things, but the whole purpose is to develop character and a winning attitude.”

Pollan also said that the study session probably began because the players approached the coach about wanting to learn more about growing up and being men.

Just to state the obvious, even if the bible study isn’t mandatory, it shouldn’t be happening at all in that context. The coach of a team shouldn’t even be suggesting that student join him for a Bible study, not just because he’s a school employee endorsing a religious message, but because it’s easy to think he’s favoring students who come to the discussion. He might give them more playing time, a better spot in the lineup, etc.

Also, God’s Not Dead isn’t We Are Marshall. It’s not about inspiration. It’s fundamentally about preaching a Christian message. The Kingdom Man series is undoubtedly about faith.

Is this superintendent oblivious or ignorant? I can’t decide.

What about the message on the uniforms?

“The kids expressed a desire to have something like that on their t-shirts.” said Pollan. “If it’s something they feel strongly about, of course, the coaches and staff will be responsive to it.”

But these aren’t shirts the kids just made on their own. They are the “official practice uniforms” endorsed by the school. Administrators and coaches are supposed to say no when the message is a religious one. It’s the same reason they could say no to a team uniform that said “God Doesn’t Hear Your Prayers, so Keep Practicing!”

To make matters worse, the superintendent sent an email to the staff, which FFRF also got ahold of, in which she defended Stewart. (The CAPS LOCK is all her.) 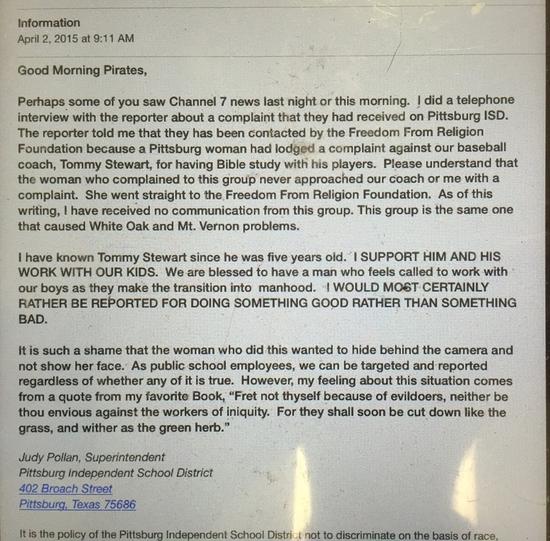 I have known Tommy Stewart since he was five years old. I SUPPORT HIM AND HIS WORK WITH OUR KIDS. We are blessed to have a man who feels called to work with our boys as they make the transition into manhood. I WOULD MOST CERTAINLY RATHER BE REPORTED FOR DOING SOMETHING GOOD RATHER THAN DOING SOMETHING BAD.

It is such a shame that the woman who did this wanted to hide behind the camera and not show her face. As public school employees, we can be targeted and reported regardless of whether any of it is true. However, my feeling about this situation comes from a quote from my favorite Book, “Fret not thyself because of evildoers, neither be thou envious against the workers of iniquity. For they shall soon be cut down like the grass, and wither as the green herb.”

That last line is Psalm 37:1-2, by the way. So she used a Bible verse to defend a coach who is accused of preaching the Bible.

What Pollen doesn’t understand is that what she thinks is “good” for children is illegal in the eyes of the law. And maybe she would understand that if the coach were pushing anything other than Christianity. If he were Muslim, atheist, Pagan, or Hindu, this would be a no-brainer and he would’ve been reprimanded a long time ago.

Is there any doubt why the complainant chose to remain anonymous? It’s because of people like Stewart and Pollen, who believe their faith puts them above the law and look down upon those who want nothing more than for public officials to remain neutral on matters of religion.

If Coach Stewart wants to teach boys how to become men, then he can teach them to work hard, respect other people, and play by the rules.

None of that requires the Gospel. Just common sense.

April 3, 2015
Before You Celebrate Easter, Check Out This Infographic Showing How the Gospels Got It All Wrong
Next Post