Penn Jillette Discusses Religious Freedom Bills on CNN Panel, Much to the Chagrin of a Christian Guest April 3, 2015 Rachel Ford

Penn Jillette Discusses Religious Freedom Bills on CNN Panel, Much to the Chagrin of a Christian Guest

On Wednesday, CNN Host Don Lemon hosted a panel to discuss the Indiana and Arkansas “religious freedom” laws that have sparked so much national outrage. His guests were the Alliance Defending Freedom’s Kristen Waggoner, the ACLU’s Rita Sklar and magician (slash-atheist) Penn Jillette.

The entire discussion was interesting, but some of the most insightful commentary came from Jillette. 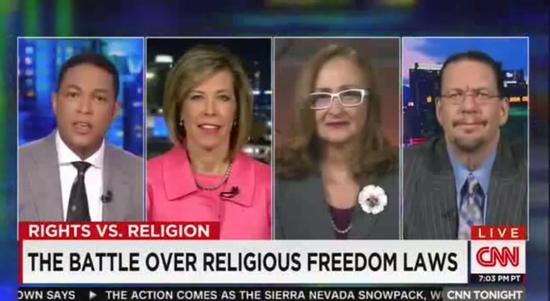 I don’t want to misrepresent myself as an expert, but there is more to gay sex than cake and flowers. These people are not being asked to engage in gay sex or even endorse gay sex. They’re being asked to sell flowers and cake to people, and that is hypothetical. Now I’m a libertarian and an atheist, so I am kind of fighting myself on this — I don’t like the government involved in telling the people what to do, and I certainly want people to have religious freedom, because the only way that people who don’t have religion are going to have freedom is for people who do have religion have freedom.

But all the same, we have to make sure that we don’t get too crazy in the hypotheticals. We are not talking about forcing people to engage in gay sex or even endorse gay sex. We are asking them that maybe they can treat people the same as other people, and that does not seem unreasonable. It is okay, I suppose, although goofy, to be against gays, but it is not okay to be against people that simply want to use your services as a business. I mean the free market should take care of this faster than anything.

As Waggoner represented the situation, the government is “attacking” Christians, insisting that they choose between losing everything or losing their religious freedom. But the point that Jillette makes is valid: No one is mandating approval or endorsement of things you disagree with or requiring a change of religious beliefs. (While Jillette doesn’t believe we need laws in either direction, as he feels the market and changing opinions will resolve the issue in time, in this panel he makes the case against the rationale for pro-discrimination legislation.)

The government isn’t saying that people have to make wedding cakes for gay couples. It isn’t saying you have to be an ambulance driver. But if you choose to sell wedding cakes, or drive ambulances, or anything else, refusing to provide those services to gay people is not okay, no matter the occasion. Even if you think your God says they have cooties.

You don’t have to like your customers, approve of them, or endorse them. But if you offer a service to the public, you can’t take it back because that customer happens to be gay or wants to use those services for an event you might disapprove of, whether that’s baking a wedding cake for a gay couple or driving a gay couple to the hospital in an ambulance because one of them was injured. To refuse to perform the normal function of your job based on your customer’s sexual orientation is discrimination. And it shouldn’t be sanctioned by the government.

Oh, and Jillette’s comments toward the end of the piece, as he describes these efforts as the desperate actions of people who realize their cause is lost, are also well worth watching, if only for Waggoner’s expressions.

April 3, 2015 Bill to Make the Holy Bible Tennessee's Official State Book Passes Through Committee on 2-1 Vote
Browse Our Archives
What Are Your Thoughts?leave a comment