This week, Canadian MP James Lunney quit the Conservative party and became an Independent after claiming his party was guilty of “deliberate attempts to suppress a Christian world view.”

In an interview with the CBC’s Evan Solomon, Lunney (apparently not pronounced “looney”) gave a hilarious defense of his anti-science, anti-reality beliefs (beginning at 1:09:17): 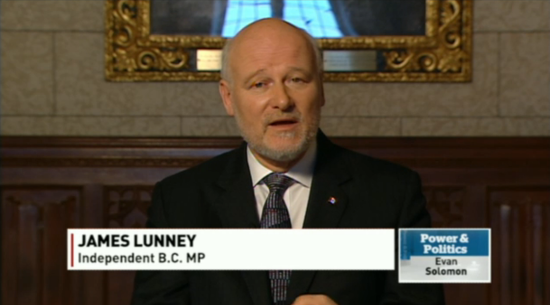 1:15:00 – “Einstein’s Theory of Relativity”
1:15:47 – Big banks and industry are trying to shut down Christian law schools
1:17:20 – “Scientists are gagged” and two unnamed PhDs contacted him to complain about how their administration is preventing them from challenging evolution
1:18:00 – Smithsonian scientist Richard von Sternberg was fired for publishing an article on Intelligent Design. (Actually, von Sternberg was never a paid employee of the Smithsonian and the article he published wasn’t properly peer-reviewed.)
1:21:50 – Reaction by panel

Lunney isn’t running for re-election later this year for unrelated reasons, so that’s a plus. But what’s most stunning to me is how this is a big story. If he were a member of the GOP in the United States, he’d probably be considered a moderate.

(Thanks to Stephen for the link and timestamps)