20% of Americans Will Be Recruited Into Homosexuality In The Next Century, Says Gordon Klingenschmitt April 3, 2015 Camille Beredjick

20% of Americans Will Be Recruited Into Homosexuality In The Next Century, Says Gordon Klingenschmitt

This week, Colorado State Representative (and notorious babbling conservative) Gordon Klingenschmitt predicted a future some of us can only dream of. He says that in a hundred years, 20% of the population will be gay.

Before we go any further, this actually isn’t impossible, whether in a century or today. Depending on what survey you consult, the portion of the population that identifies as gay or lesbian might be 1%, 3%, 5%, or any other single-digit figure, really. But because stigma against LGBT people is still alive and well, we have no way of knowing how many people refrain from accurately reporting their sexual orientation, whether because of safety, family acceptance, internal denial, or any of the other reasons a person might not want to come out.

What is misguided, though, is Klingenschmitt’s idea of how we’re going to reach this figure. Here’s the video: 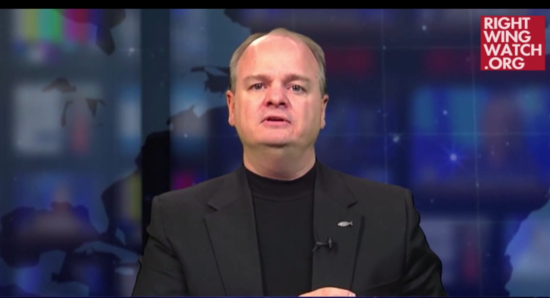 This proves to me that the Bible works,” he said. “That when people believe the Bible, they promote holiness and they invite the Holy Spirit to rule their hearts, they don’t have all these homosexual addiction problems that they have in places where they don’t believe the Bible and they reject the Bible and they teach [their] children in California schools that homosexuality is a good thing and they celebrate Harvey Milk Day and they have all kinds of policies to promote that in the classroom. Well, no wonder their population is growing! They’re recruiting people into [that] movement on the left coast.

“The disparity in the population proves to me that it is a recruitment effort for your children,” Klingenschmitt continued. “And thank God they’re resisting that in Alabama. I wish the rest of America would protect their children as well as they do in Alabama, which is why they have a lower percentage of children recruited, according to [this] Gallup poll, in the state of Alabama.”

Klingenschmitt then went on to warn that children raised in same-sex households are more likely to be gay, which is further proof that children are being recruited, meaning that “in a hundred years, if we continue to allow this recruiting effort across America, all of the children in all of the public schools, if we don’t stop this, will be re-educated that this is a good thing.”

People who live near supportive, open-minded individuals are more likely to be open about their true selves! Shocking! Also, Rep. Klingenschmitt, if gay parents are the ones responsible for gay children, how do you explain all the straight parents who ended up with gay children? Where did their genes go wrong?!

For real, though. There are certainly more of us out there than the surveys say, but we’re not brainwashing your children (although I can name certain anti-LGBT groups who are). If the stats are up to 20% by 2115, so be it — maybe that’s how long we’ll have to wait before being gay isn’t so heavily stigmatized.

April 3, 2015
Missouri House Passes Bill Forcing Public Schools to Recite the Pledge of Allegiance Every Day... In English
Next Post

April 3, 2015Memphis Flyer Publishes Cover Story on Local Atheists
Browse Our Archives
What Are Your Thoughts?leave a comment