Earlier this year, Craig Stephen Hicks killed three Muslim students near the University of North Carolina at Chapel Hill campus. One of the storylines that developed in the case was that Hicks was an atheist — his Facebook page featured a constant stream of atheist memes — even though there’s no evidence (then or now) that his religious beliefs had anything to do with his crime.

That’s why I’m bracing myself for what people are going to say about 14-year-old Jamie Silvonek.

Like other teenagers who claim to be Secular Humanists, her Twitter timeline includes several tweets and retweets promoting her (non-)beliefs: 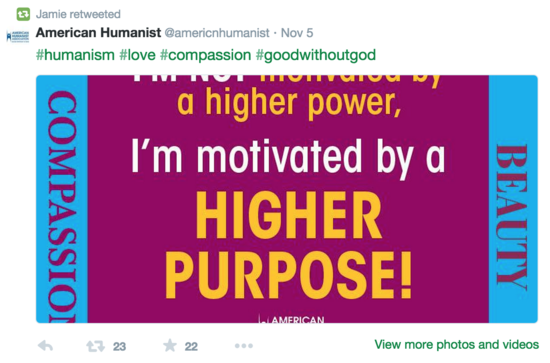 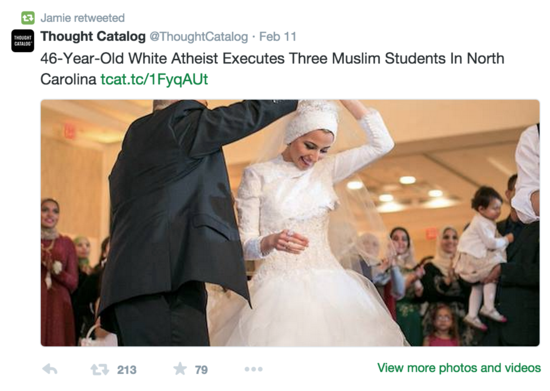 That last one, a retweet from February 11, is a story about Hicks’ murder, which is especially disturbing when you hear why I’m bringing this all up: Silvonik is being charged as an adult for allegedly killing her mother with the help of her 20-year-old boyfriend Caleb G. Barnes.

Lehigh County District Attorney Jim Martin gave the details of the crime at a news conference Thursday at the county’s digital crime lab, outlining a series of text messages he said show Silvonek and Barnes planned the killing. He also announced Silvonek was charged as an adult with criminal homicide in her mother’s stabbing.

“I want her gone,” Jamie Silvonek says in one of more than 75 text messages released in a probable cause affidavit charging her with abuse of a corpse, tampering with evidence and criminal conspiracy as well as homicide. Barnes already faces those charges.

Jamie Silvonek is the youngest girl charged as an adult with homicide in Lehigh County history, authorities say.

According to an arrest affidavit, Silvonek appeared to do most of the planning, sometimes sweet-talking and other times being more direct in persuading Barnes to kill her parents. In one text, she tells him, “please do it, I’m going to throw up.”

The story is really as disturbing as you think it is. And while religion appears to have played no part in the crime, I promise you it won’t be long before some conservative tries to link the two, as if there’s a direct line from one to the other.

In a broader sense, though, it’s troubling to me that Silvonek embraced the label of “Secular Humanist” — not even just “atheist” — with a complete disregard for the non-violent aspect of it. Anyone who resorts to violence to settle a problem is explicitly going against the tenets of that philosophy.

We can certainly argue that her beliefs had nothing to do with her alleged crime, but we can’t deny what those beliefs were. This was someone who followed American Atheists and the American Humanist Association on Twitter (not to mention popular individual atheists). It wasn’t enough to lead her away from apparently doing the unthinkable.

More on this story, I’m sure, as it develops.

April 3, 2015 Before You Celebrate Easter, Check Out This Infographic Showing How the Gospels Got It All Wrong
Browse Our Archives
What Are Your Thoughts?leave a comment