Republican Senator Urges Us to “Have a Sense of Perspective” Since Gay People in Other Countries Are Executed April 2, 2015 Rachel Ford

In an interview on CNN on Wednesday, Arkansas Senator Tom Cotton was asked to share his opinion of the controversy surrounding the Arkansas and Indiana so-called “religious freedom” bills. The Republican senator tried to sidestep the reason for the controversy — namely, that the bills in question essentially gave a free pass to discrimination for religious reasons — by remarking that in his state, “we believe in religious freedom.”

“Well everyone believes in religious freedom,” interviewer Wolf Blitzer responded. What, he pressed, was Cotton’s response to the “potential discrimination” that could stem from such laws? 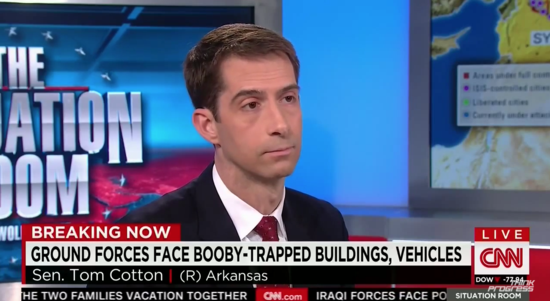 Cotton responded by comparing the bill to the federal law signed by President Clinton, saying that “a lot of the concerns about discrimination haven’t been borne to bear over the last twenty years.” While the unintended impact of that law (and decisions stemming from it, like Hobby Lobby) is a post for another time, Think Progress’ Judd Legum notes

Cotton is wrong in suggesting that Indiana’s law was the same as the federal law signed by President Clinton in 1993. Indiana’s law has significant differences that made discrimination [against] LGBT people — and general confusion — more likely. This was acknowledged by Arkansas Governor Asa Hutchinson (R), who refused to sign a bill nearly identical to the one passed in Indiana until it was brought into line with the federal model.

But this was by no means the most interesting part of Cotton’s response. That distinction belongs to the senator’s remarks about “perspective.”

I think it’s important we have a sense of perspective. In Iran they hang you for the crime of being gay. They’re currently imprisoning an American preacher for spreading the gospel of Jesus Christ in Iran. We should focus on the most important priorities that our country faces right now. And I would say a nuclear armed Iran given the threat that it poses to the region and to our interests in the region and American citizens is the most important thing we can be focusing on.

However Cotton meant those comments — whether to suggest that we shouldn’t waste time worrying about discrimination at home while we could be focusing on potential war with Iran, or that non-lethal discrimination isn’t a big deal because other countries discriminate worse than we do — they’re absurd.

Concern about discrimination in the United States and concern about Iranian nuclear negotiations are not mutually exclusive; it’s not an either-or choice, where choosing to treat gay people like human beings means inviting nuclear war. And discrimination here is certainly not less of an issue because fundamentalists elsewhere will execute gay people.