When it comes to putting up displays in the Wisconsin State Capitol building in Madison, it’s pretty much a free-for-all, as long as you fill out the proper paperwork.

Since Easter is upon us, the Freedom From Religion Foundation put up a sign saying “In Reason We Trust” last month: 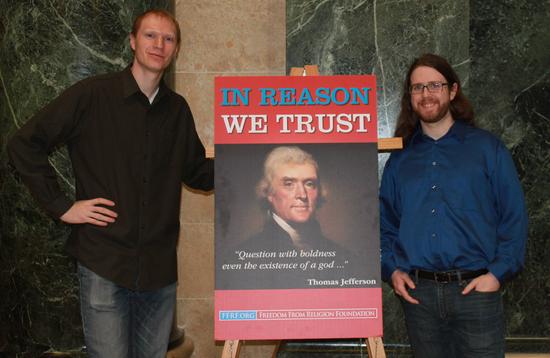 There was hardly any controversy over the sign… until this past Saturday. At 1:13p, three people stole the sign and the easel on which it was displayed: 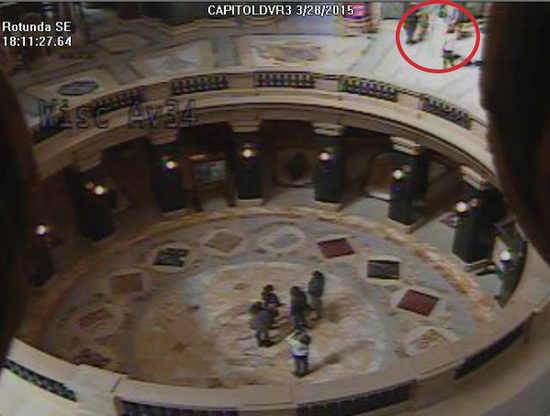 The suspects are two males and a female, all Caucasian. Footage reveals one male suspect struggling to remove the tape securing the sign to the easel. The additional suspects joined shortly after, and posed to take multiple “selfies” on a cellphone camera. The thief left via the Wisconsin Avenue exit and the others exited via the West Washington exit.

The thieves will be chagrined to learn that the wooden easel wasn’t FFRF property. The stolen easel was a rental from the Capitol Police Department.

FFRF is offering a total of $1,000 reward for information leading to the arrest and conviction of the thief.

If you have any information pertaining to this theft, please contact FFRF.

April 2, 2015
Who Else Do Christian Business Owners Have to Discriminate Against?
Next Post

April 2, 2015 Please Support the Work I Do Through This Site
Browse Our Archives
What Are Your Thoughts?leave a comment