Christian Florist Says She’d Deny Service to Gay People, but Not Adulterers, Because It’s a “Different Kind of Sin”

CNN’s Gary Tuchman visited several florists in rural Georgia and asked if they would provide certain services to gay people. Of course they all said no… because Jesus. 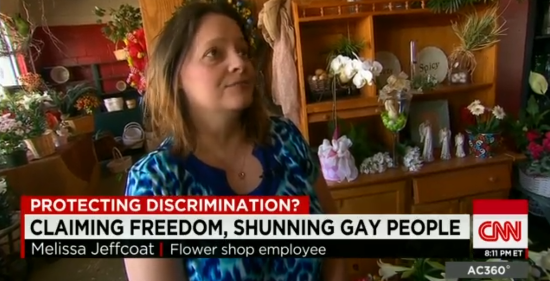 The most telling part of the exchange was this one with florist Melissa Jeffcoat in which she was confronted about the specifics of her bigotry:

Tuchman: … In the Ten Commandments, it says you can’t commit adultery…

Tuchman: It says you need to honor your father and mother.

Tuchman: If someone didn’t honor their parents or committed adultery, would you serve them?

Tuchman: Well, why would you serve them but not serve someone who is gay?

Jeffcoat: It’s just a different kind of sin to me and I just don’t believe in it.

(But she believes in adultery?)

All sins are equal, but some are more equal than others. Got it. #ChristianLogic

How many of these exchanges do people need to hear before they accept that the law that currently exists in Indiana is just a vehicle for faith-based discrimination against the LGBT community? They can pretend it’s about “religious freedom” and offer hypotheticals about other religious groups, but it’s not like anyone else is fighting this hard for the opportunity to discriminate against groups they don’t “agree” with.

The segment, in which Tuchman spoke to five florists in a small area, also puts a rest to the idea that you can just seek services elsewhere if one person says no. Christians don’t live on an island. If you’re gay and live in certain parts of the country, you’re just out of luck.

April 2, 2015
New Report Projects the Number of Religiously-Unaffiliated People in the U.S. to Double to 100 Million by 2050
Next Post

April 2, 2015 Who Else Do Christian Business Owners Have to Discriminate Against?
Browse Our Archives
What Are Your Thoughts?leave a comment