On March 2, motivational speaker Bob Lenz gave a presentation at Iron Mountain High School in Michigan… which might have been okay until he used the opportunity to promote an event he was hosting at a local church later that evening. This is the flyer he gave to students: 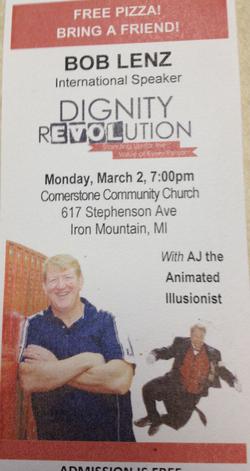 And how did that evening event go? Well, he boasted about his conversions-to-Jesus after another (similar) event in Kansas on Facebook:

The Freedom From Religion Foundation has sent a letter to the district explaining the obvious problem here, and asking how officials could have allowed this to happen:

We are aware that some Christian missionaries insinuate themselves into public schools by camouflaging their purposes. It is incumbent that public officials do due diligence when approached by outside groups with vested interests in pitching their messages to a captive audience of public school students. However, in this case, it would have taken only a cursory glance at Life Promotions’ website to verify its religious agenda. It is difficult for us to understand how this event could have been approved.

FFRF is simply asking the district to promise the proselytizing won’t happen again in the future by properly vetting speakers. It’s letting them off easy given how blatant a pitch for Jesus this was.

March 31, 2015
Author of The Brick Bible Series Comes Out as Transgender
Next Post

March 31, 2015 Melbourne Priest Suggests Woman Might Have Avoided Being Raped and Murdered If Only She Were More "Faith-Filled"
Browse Our Archives
What Are Your Thoughts?leave a comment