Nicholas Kristof is Wrong: Evangelical Christians Have Done Plenty to Earn the Mockery Aimed in Their Direction March 30, 2015 Hemant Mehta

Nicholas Kristof is Wrong: Evangelical Christians Have Done Plenty to Earn the Mockery Aimed in Their Direction

In the New York Times yesterday, Nicholas Kristof lamented the open mockery often aimed at evangelical Christians by performing an incredible bait-and-switch. He spent the bulk of his column profiling one example of an evangelical, Dr. Stephen Foster (below), who is doing incredible, selfless work in Angola: 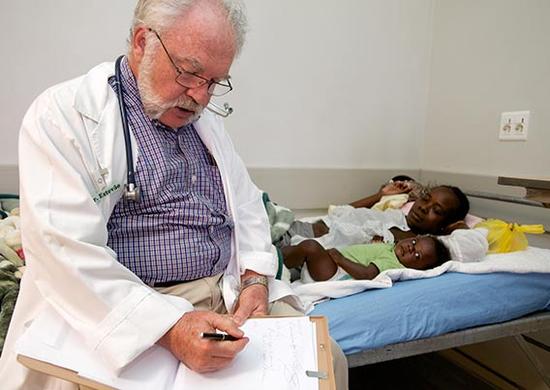 Foster, the son and grandson of missionaries, has survived tangles with a 6-foot cobra and angry soldiers. He has had to make do with rudimentary supplies: Once, he said, he turned the tube for a vehicle’s windshield-washing fluid into a catheter to drain a patient’s engorged bladder.

Armed soldiers once tried to kidnap 25 of his male nurses, and when Foster ordered the gunmen off the property, he said, they fired Ak-47 rounds near his feet. He held firm, and they eventually retreated without the nurses.

Oh, by the way, this is where Dr. Foster raised his family.

No doubt Foster deserves our respect for that. More importantly, though, I can’t think of anyone who would ever disrespect someone who puts his life in harm’s way to help other people like that. How amazing is this guy?!

But to use him as an example of why evangelicals shouldn’t be mocked is profoundly disingenuous.

As is this statement:

… religious Americans donate more of their incomes to charity, and volunteer more hours, than the nonreligious, according to polls.

That’s true, but Kristof neglects to mention that “charity” includes giving money and time to church, so religious people are effectively helping themselves. That Gallup poll Kristof linked to even said as much, before pointing out that, when you remove church from the equation, the rates of giving and volunteering are roughly identical:

Back to his main point, though, Kristof notes that “the liberal caricature of evangelicals is incomplete and unfair” without ever explaining what that caricature is, but he offers this as an explanation:

That’s partly because some evangelical leaders were intolerant blowhards who give faith a bad name. Jerry Falwell and Pat Robertson famously blamed the 9/11 terror attacks in part on feminists, gays and lesbians, and doctors who perform abortions. After an outcry, both men backed off.

There’s your problem right there.

It’s not like Falwell and Robertson are the only evangelicals to ever say something so grossly ridiculous (and untrue). We have evangelical leaders, including “respected” ones like Pastor Rick Warren, leading the charge against civil rights for gay people, promoting disastrous abstinence-only sex education, arguing that well-established scientific principles like climate change and evolution and an Earth that’s not just a few thousand years old are all just part of some liberal conspiracy.

Not all evangelicals hold these beliefs, of course, but most of them do.

And for that reason, mocking religious beliefs can be a powerful force for change:

Do evangelicals receive a disproportionate level of mockery? Probably, but they also have more political power than anyone else.

No one is seriously criticizing religious people whose faith compels them to help others.

We mock evangelicals for their irrational beliefs in the face of overwhelming evidence to the contrary.

We mock them for squandering the golden opportunity they have to impact society for the better.

We mock them for constantly pretending to be persecuted even though they have all the power and frequently use it to oppress marginalized groups.

We mock them for getting in between women and their doctors, or gay couples and their wedding cakes, all in the name of “freedom.”

We mock them for believing in talking snakes, and people living for hundreds of years, and the concept of sin and eternal damnation, and that God killed his son (who was really himself) who then rose from the dead and then disappeared but will return (in our lifetimes!) to take us back with him.

They deserve mockery because they believe in absurdities.

Kristof ends with this:

The next time you hear someone at a cocktail party mock evangelicals, think of Dr. Foster and those like him. These are folks who don’t so much proclaim the gospel as live it. They deserve better.

I agree. Foster deserves better, as do those just like him. And the fault for why they’re not getting the respect they deserve lays entirely at the feet of their brothers and sisters in Christ.

Maybe if more evangelicals spent time helping others, like Dr. Foster, instead of pushing their faulty beliefs on everybody else through the government, you’d see a lot more respect for them as a group.

Until then, there’s no reason for the rest of us to stop pointing out, in whatever way we think effective, where their beliefs are just flat-out wrong.

March 30, 2015 Here You Go, Indiana: Even More People You Can Now Discriminate Against Thanks to the Bible
Browse Our Archives
What Are Your Thoughts?leave a comment