With so many stories on this site about non-Christians being denied the chance to deliver invocations at government meetings, it’s always nice to highlight an instance where it’s done right.

Iowa State Rep. Liz Bennett has invited Wiccan priestess Deborah Maynard (below) to give the opening invocation on April 9: 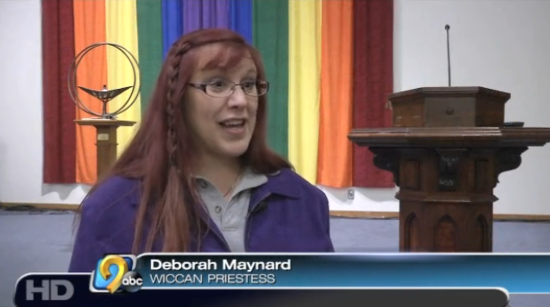 According to Maynard, her prayer will make history.

“I didn’t really think it was that big of a deal, until I did more research on it,” she said. “The more research I did on it, that’s when I found that it’s never been done in a state government body before by a Wiccan.”

“I think there are people across the nation who don’t realize how diverse Iowa really is, and so I’m proud that this is another first for us,” Bennett said.

This is in stark contrast to what happened in Huntsville, Alabama last year, when a Wiccan was disinvited from delivering an invocation due to “community fears.”

By the way, you can almost guarantee that Rep. Bennett will be getting some nasty comments from Good Christians™ who think she’s doing something wrong, so take a moment and send her an email thanking her for reaching out to a non-traditional voice.