An Ohio psychic talk show host and his wife, both professional mediums and “psychic investigators,” were profiled rather unskeptically this week in the Kenyon College newspaper.

Beth Deering (below), who says she “can see angels and demons,”

… has been asked to be present at the hospital beds of the terminally ill, “as they’re crossing over,” she said. “I see what they’re experiencing. I’ve seen heaven, I’ve seen Jesus Christ.” 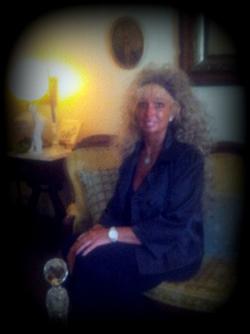 (One supposes she found Jesus to be fair and Western European in face, just like his pictures, as tourists to Heaven so often report…) The writer, presumably a journalism major who will, I hope, develop some healthy skepticism in time, reports straightforwardly that Deering:

… also works on homicide cases as a paranormal investigator with local law enforcement in situations where a space is believed to be haunted, or as a connection with deceased parties.

Deering’s husband Geoffrey Allen claims in a separate radio interview that his ability is trusted by law enforcement officials who normally dismiss other less credible psychics. That’s because his reputation supposedly speaks for itself. Yet publicity bios for Allen around the web make no references to actual cases or agencies assisted. There is only a reference to an unspecified brief career after college in law enforcement, where he says his ability secretly helped him solve cases. “They don’t give badges and guns to people who talk to dead people,” he explains, “so I didn’t mention it.”

When the radio interviewer followed up by asking for examples, Allen trailed off vaguely into a string of excuses as to why someone able to find missing people doesn’t actually seem to ever do it. The closest we hear to a response concerns two North Carolina teens that had been missing for seven years when the family asked for input from five psychics. All sensed death (really going out on a limb there). Failing to mention whether he actually helped find them, Allen veered off into bemoaning how rarely his gift is usable. He couldn’t tell the family he knew the teens had “crossed over” because of an oddly self-important concern that “I’d be in violation of the law if I declared them dead.” (I hope of course he keeps to that policy, though not for his protection. Psychics have caused needless pain when missing children were found alive.)

Just as the psychic detective agency “Find Me” recently admitted to a fawning NPR radio host, the couple is hoping a new round of publicity will bag them a TV show. They have a Kickstarter campaign to raise $15,000 for “a documentary of their lives together… which will be then shopped to television networks.”

Do local law enforcement actually know about their supposed “colleagues”? Is there any actual evidence anywhere to support these claims? If it’s out there, I couldn’t find it — not a bit of information that one could use to even begin to corroborate their claims. Perhaps they learned from “Find Me” that it’s risky for self-proclaimed psychic investigators to cite actual cases because that gives us a chance to check out their claims for ourselves.

It’s not always easy making a living as a psychic, though. So far, their Kickstarter campaign has only one backer and $5.

They’re also selling Geoff’s book So You Wanna Be a Psychic on their websites, which teaches that our connection to “the other side” is all about electricity. Allen can prove it. He offers in another interview the evidence. You know those cool sparks you get when you bite into a Wint-O-Green Life Saver in the dark? (It’s really neat when you’re caving.) Well, at the 9:20 mark,

… You can see the sparks, but you can’t feel it, so it shows that there is energy out there that we can see but not feel, and feel but not see… We really don’t know a whole lot about electrical energy…

Perhaps you should consider just speaking for yourself, Mr. Allen.