The Good News Club is a weekly program targeting elementary school children, because a lot of Christians love to indoctrinate kids before they start asking critical questions. (If you haven’t read it yet, check out Katherine Stewart‘s fantastic book about the organization.)

When a GNC began at Fairbanks Road Elementary School in New York, Monroe County residents Dan Courtney, Bill Courtney, and Kevin Davis weren’t sure how to respond. It wasn’t illegal for the group to be there, but they wanted an alternative for parents like them who preferred more skeptical fare for their kids.

So, earlier this year, they began a group of their own called Young Skeptics (sponsored by the tongue-in-cheek “Better News Club, Inc”). 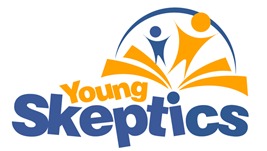 In the meantime, they’ve been keeping tabs on the GNC at the elementary school and realized there were some major problems:

… Dan had contacted the school superintendent and expresse[d] our concerns. He noted that the conduct of the GNC is intimidating to children, which was a violation of the district’s facilities use policy. The superintendent contacted the local GNC leaders who replied, stating that they are not using the CEF’s GNC curriculum, despite the requirement of the CEF that they must use it. This told us two things. One, that the local leaders recognized the CEF curriculum was over the top and bad for kids, and two, the local group was going rogue in the eyes of the CEF. We wanted to verify this for ourselves, and since all meetings had the district requirement that they be open to the public, we decided to attend and observe.

And observe they did. It led to the police being called in (for no reason) and a chance to chat with the state’s GNC head… who told them a very different story from what the superintendent had said.

Check out this video explaining what happened:

Dan summarized his experience with this advice:

The Good News Club operates in over 4,000 elementary schools across the country, all with the same message that children are sinful and deserve death and eternal torture. Mental health professionals have said that such messages are ‘very traumatic’ and ‘lead to mental health problems, affecting self-esteem, self-confidence, coping skills, relationships, lifestyle, personality and more.’

This isn’t just a local issue, but a huge problem. But what the local GNC’s reaction has taught me is that the solution, or at least part of the solution, is quite simple. Just show up and watch what they’re doing. An organization that is proud of what they’re doing, and is doing the right thing would welcome that; even encourage that kind of public interest. For the GNC, that kind of sunshine is toxic.

Katherine Stewart, who literally wrote the book on the GNC, wasn’t surprised by the atheists’ findings, telling me in a statement:

Unfortunately, deception is built into the very idea of Good News Clubs in public elementary schools. Little kids, kids as young as five and six years old, simply can’t make a distinction between an activity that takes place in their school and one that is sponsored by their school. Installing the Clubs in public schools produces the false but unavoidable impression in these young children that their school endorses a particular religion. Public schools have a kind of cloak of authority in their minds; they think that if something is being taught in their school, it must be what their school wants them to believe.

Also, by operating in public elementary schools, the Child Evangelism Fellowship is compelling taxpayers to subsidize their religion, which is clearly at odds with our longstanding principle of Separation of Church and State.

At present, there are nearly four thousand Good News Clubs in public elementary schools around the country. And yet, there is a simple lack of awareness that this is taking place, as well as a lack of awareness about the fundamentalism at the heart of the Clubs. In many instances, communities, school boards, and even the parents who sign their own kids up for the program don’t know what is really going on in those classrooms. I applaud efforts to bring this information into the light.

(Thanks to Lisa for the link. Portions of this article were published earlier)

March 29, 2015
CNN Finally Featured a Black Voice in Their Atheism Coverage
Next Post