A Simple Way for Atheists to Help Ex-Muslims

I was giving a talk in Vancouver yesterday and also had the pleasure of hearing Armin Navabi share his journey from Islam to atheism. Navabi is the founder of Atheist Republic, a forum for non-believers, and he recently wrote about why it’s so important for former Muslims to share their stories: 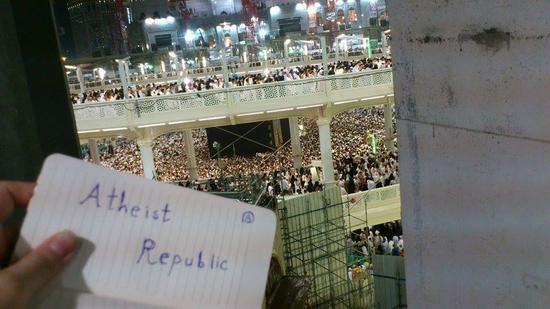 It’s easy to think that Islamic countries are too religious to do anything about. But it’s harder to dismiss these countries when we start caring about more people who live there. Atheism and secular activism isn’t new in Islamic countries. It’s just been forced underground and could use some help gaining attention — and boosting their signal is precisely what we can accomplish when we share their stories.

It’s easy sometimes for apostates to feel forgotten or ignored, especially if they are not in a position where they can feel comfortable vocalizing their views. Seeing fellow ex-Muslims receive positive feedback and support can bolster their confidence, empowering them and helping them see that there’s a group of people in the world who truly care about them. A few comments might not seem like much, but to a struggling atheist in an oppressive environment, it can mean the world.

To that end, he’s asking for people to contribute audio messages to those atheists who can’t be as outspoken about their non-belief. Share words of support or tell your own coming out story — anonymously or not — and they’ll be included in a podcast Navabi will be starting up soon. The green link to record a message is at the bottom of his post.

March 29, 2015
The Trouble with Teaching Evolution When You're Surrounded by Creationists
Next Post