Creationist Eric Hovind Preached Creationism at a Georgia Public School This Week and We Have Proof March 28, 2015 Hemant Mehta

***Update*** (3/31): Eric Hovind told me in a statement that even though the Genesis 3D trailer was included (twice!) in his presentation, he did not show it to students. We’ll have to take his word for that. He also said his presentation was not promoting Creationism: “I spoke on Critical Thinking and gave scientific facts. Never mentioned God or the Bible or Creation.”

As anyone can see from his slides, though, the presentation was advancing Creationist ideas in everything but name. The knocks on evolution were not grounded in any credible science, and the slides presented ideas frequently tossed around by other Creationists.

To be clear, I’m not blaming Hovind for his presentation. This is what he does for a living. But the administration at the public school never should have allowed him to speak to students when his presentation, his recommendation letters, and his reputation all point to someone whose beliefs are purely faith-based and have no backing from the broader scientific community.

If you’re doing something that is arguably a violation of the law, why would you flaunt it on Facebook?

Creationist Eric Hovind posted this on his page earlier this week: 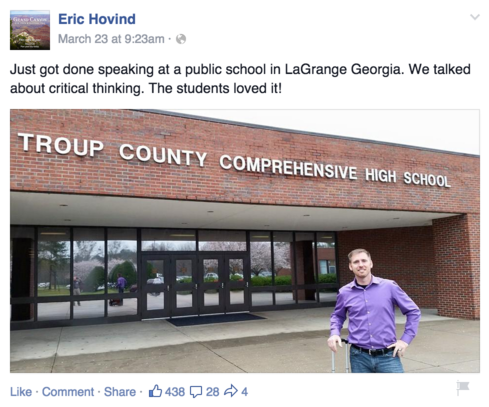 Hovind was invited to a public school (!) to teach “critical thinking” (?!?!)… What the hell did that look like?

Hovind deflected one commenter who asked him if his presentation was recorded by saying “Nope. Sorry,” so I guess we have no record of what he talked about.

A reader of this site, who wishes to remain anonymous, issued an open records request with the district to get a copy of all communications involved in bringing Hovind to Georgia’s Troup County Comprehensive High School… along with a copy of his presentation.

After looking at all the communication provided by the district, here’s what I can tell you:

Hovind’s appearance was supported by a local minister, Tim Tidwell of Oakside Baptist Church, who at the very least sent Principal Dennis “Chip” Medders a recommendation on Hovind’s behalf.

One of the other recommendation letters Hovind provided as a reference included this one from a Mississippi high school principal who praised him (15 years ago) for making it clear that “the creationist position was not only scientific, but also logical and appealing to anyone with an open mind.” 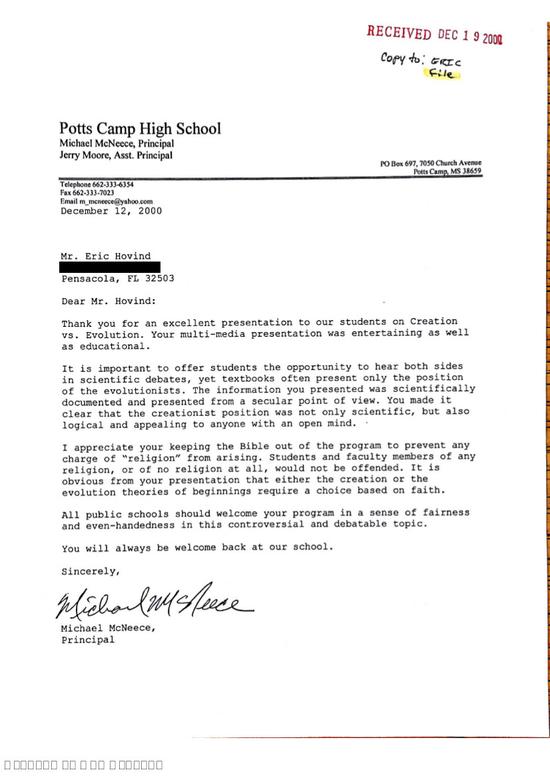 All of this, by the way, should’ve been a tip-off that Hovind had no business speaking at the school. Preaching Creationism is not, by any stretch of the imagination, a way of teaching “critical thinking.”

The district said Hovind spoke to the “debate club,” which might suggest his talk took place outside of the normal school day (which would be less damning), however, based on the timestamp of Hovind’s Facebook photo seen above (9:23a) and the fact that there’s no debate club/activity listed on the school’s website, it clearly happened during class time.

And then there’s the presentation.

It begins with a two-and-a-half minute trailer for a Genesis 3D movie that has the support of Ken Ham and other Creationists:

Then we get right into Hovind’s 116-slide anti-evolution presentation, some of which you can see below: 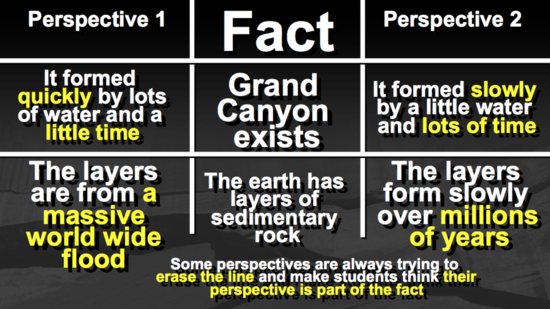 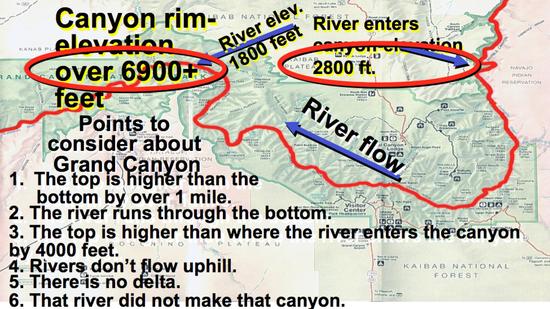 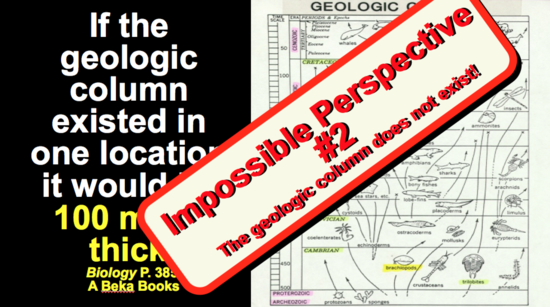 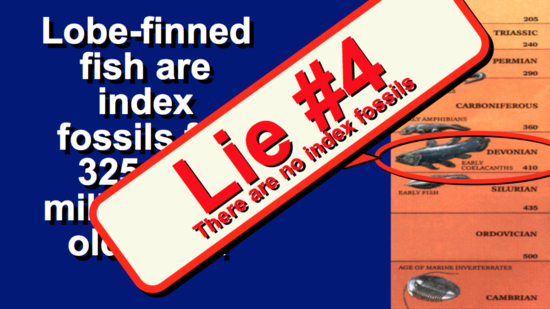 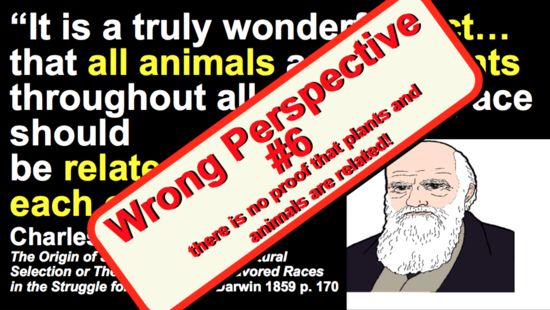 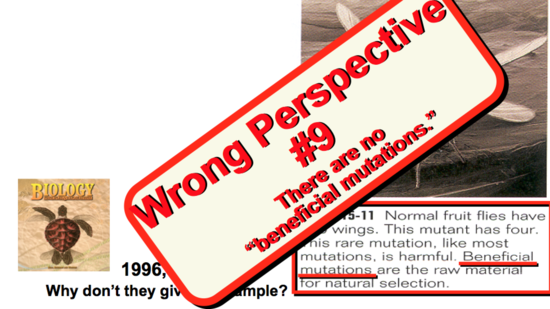 I was tempted to think he accidentally sent the school (and therefore my tipster) a copy of his debate presentation from two nights earlier, but a quick glance at Facebook shows Hovind at the debate talking about a slide that appears nowhere in his public school presentation: 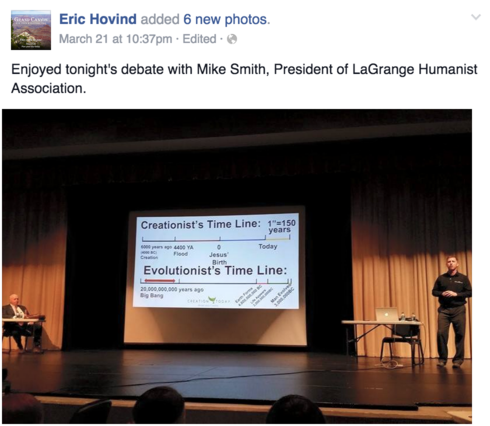 So he was giving a different Creationism talk at the school.

To be clear, Hovind didn’t preach the Bible, which is probably why he thinks he can get away with this. But his presentation undermines what science teachers are supposed to be getting across to students by telling the kids (in no subtle terms) that they’re being taught a lie.

Creationism has no basis in the facts, and it’s not supposed to be taught in public school for that reason. The Supreme Court has ruled on this and the issue has played out in our legal system time and time again. It’s a faith-based position that’s empty on evidence.

I don’t blame Hovind for trying to sneak into the school under the guise of teaching “critical thinking,” but the administrators at Troup County Comprehensive High School are at fault for giving him this platform despite ample evidence of what he was going to do once he got the opportunity.

March 28, 2015 A Telephone Psychic Confesses It Was All a Scam
Browse Our Archives
What Are Your Thoughts?leave a comment