Anti-LGBT, Anti-Atheist, and Anti-Anyone Discrimination Are All Legal In Indiana Now

Yesterday, Indiana Governor Mike Pence (below) codified discrimination against LGBT people, atheists, women, unmarried couples, pregnant people, and virtually anybody else who could pose a “threat” to a person’s religious expression. 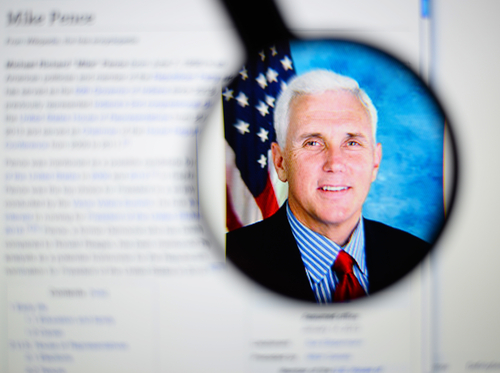 The freshly-signed Religious Freedom Restoration Act protects people from governmental consequences for discriminatory acts they commit, as long as they were acting on their deeply-held religious beliefs. The exact text says that the law:

Prohibits a governmental entity from substantially burdening a person’s exercise of religion, even if the burden results from a rule of general applicability, unless the governmental entity can demonstrate that the burden: (1) is in furtherance of a compelling governmental interest; and (2) is the least restrictive means of furthering the compelling governmental interest. Provides a procedure for remedying a violation. Specifies that the religious freedom law applies to the implementation or application of a law regardless of whether the state or any other governmental entity or official is a party to a proceeding implementing or applying the law. Prohibits an applicant, employee, or former employee from pursuing certain causes of action against a private employer.

This leaves business owners wide open to refuse service to anybody they choose, as long as they can make the case that their religious beliefs made them do it.

We often hear about business owners acting on RFRA protections when determining whether to “endorse” marriage equality via their business practices. The dichotomy between Indiana’s recent embracing of marriage equality and the passage of this law is unsettling, as CNN pointed out:

The move comes as Pence considers a bid for the 2016 Republican presidential nomination — and just a year after Pence and socially conservative lawmakers lost their first policy battle against gay Hoosiers. In 2014 they had sought to amend Indiana’s constitution to ban same-sex marriages — but were beaten back by a highly-organized coalition of Democrats, traditionally right-leaning business organizations and fiscally focused supporters of Pence’s predecessor, former GOP Gov. Mitch Daniels.

This year, though, the Republican-dominated state House and Senate both approved the “religious freedom” bill — in part because it didn’t receive the kind of public attention the gay marriage ban had drawn until it was already close to landing on Pence’s desk.

Sure, under RFRA, a same-sex couple could get legally married in Indiana in the morning and be denied a hotel room that night. But the implications of the law go far beyond the wedding industry. Here are a few other potential consequences of the law, according to the state LGBT advocacy organization Freedom Indiana:

But wait! There’s more! The language is broad enough that even more loopholes for legal discrimination will undoubtedly materialize:

Some outlets are even reporting, though without much citation, that a religious leader in New Mexico once tried to cite a RFRA in order to get away with sexually abusing teenagers, and that a pastor in Virginia used his religious freedom as a defense after kidnapping a child. The possibilities may truly be endless.

As James F. McGrath of Exploring Our Matrix points out, it’s a long shot that anybody who tries to discriminate will actually find legal protection in RFRA. But that doesn’t mean it’s not still a harmful move:

It is unlikely that anyone could effectively use legislation like this to justify discrimination, since the case has already been made that the government has the right to protect people from discrimination even when the latter is purportedly justified by religion. The real problem with this legislation is that it puts the onus on the government to justify in each and every case that it has a justified reason for “burdening” the religious freedom not just of individuals, but of private corporations. And so, even if current laws ultimately protect victims of discrimination, the new legislation will probably at the very least lead to costly legal battles before those laws are upheld in a variety of specific cases.

The uproar we’re hearing over Indiana’s RFRA tonight is only the beginning. Major organizations like the NCAA and Gen Con have publicly considered relocating their multimillion-dollar events away from Indiana; plenty of celebrities, including native Hoosiers, have spoken out loudly against the bill; even Republican Mayor of Indianapolis Greg Ballard says RFRA is the wrong move. But whether RFRA sticks around or is struck down, the reputations of Indiana’s Republican leaders will likely never recover from this abysmal move — and they shouldn’t.

March 27, 2015 Colorado Republican Legislator: God Let a Pregnant Woman Get Brutally Stabbed Because Abortion is Legal
Browse Our Archives
What Are Your Thoughts?leave a comment