The State of Atheism in America… from a Christian Perspective March 26, 2015 Hemant Mehta

The State of Atheism in America… from a Christian Perspective

The Barna Group is a research organization that focuses on questions of interest to the Christian world, and they just released a survey they did on people who haven’t gone to church in the past six months. They called them the “unchurched,” though we usually refer to them as the “Nones.” Most of them aren’t atheists, but they still want nothing to do with organized religion.

Barna’s overall findings won’t be a huge surprise for readers of this site, but they might cause panic for church leaders. We’re talking about a group that represents about 25% of adults. Also, our current demographics resemble their wish list. Just look at how Skeptics (which they define as atheists and Agnostics) have changed over the past 20 years: 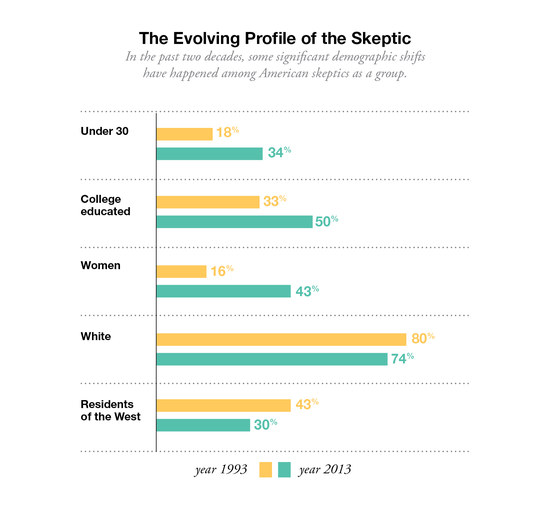 They are younger. Skeptics today are, on average, younger than in the past. Twenty years ago, 18 percent of skeptics were under 30 years old. Today that proportion has nearly doubled to 34 percent—nearly one-quarter of the total U.S. population (23%, compared to 17% in 1991). By the same token, the proportion of skeptics who are 65 or older has been cut in half, down to just 7 percent of the segment.

They are more educated. Today’s skeptics tend to be better educated than in the past. Two decades ago, one-third of skeptics were college graduates, but today half of the group has a college degree.

More of them are women. Perhaps the biggest transition of all is the entry of millions of women into the skeptic ranks. In 1993 only 16 percent of atheists and agnostics were women. By 2013 that figure had nearly tripled to 43 percent. This enormous increase is not because the number of skeptic men has declined. In fact, men’s numbers have steadily increased over the last two decades — but not nearly as rapidly as among women.

They are more racially diverse. Religious skepticism has become more racially and ethnically inclusive. While whites represented 80 percent of all skeptics 20 years ago, that figure had dropped to 74 percent by 2013. This is largely a reflection of the increasing Hispanic and Asian adults among the skeptic cohort. Asian Americans, the least-Christian ethnic demographic in the United States, especially tend to embrace skepticism. While a growing number of skeptics are Hispanic, they still remain, along with Blacks, less likely than other ethnic groups to accept the idea of a world without God. White Americans, who constitute two-thirds of the country’s total population, are well above average in their embrace of atheism and agnosticism; they comprise three-quarters of the skeptic segment.

They are more dispersed regionally. In decades past, the Northeast and West were seen as isolated hotbeds of atheism and agnosticism. They still remain the areas where skeptics are more likely to live, but the skeptic population is now broadly dispersed across all regions.

The rest of the report is fascinating to read mostly because it confirms everything you already thought about church culture: “Unchurched” Americans believe church leaders are too focused on pushing a conservative agenda on social issues, that they only rarely provide a valuable service for their communities, etc.

So congratulate yourselves. We may never be a unified community, but the message many atheists have been pushing for a long time is clearly getting through: People are realizing the church is bad for women, bad for science advocates, bad for proponents of civil rights, bad for those who are sex-positive, etc.

Church leaders should be scared.

March 26, 2015
Christian Woman Says She Knew of Her Prophetic Gift Because She Could Predict the Plots of Movies
Next Post