I Guess a Broken Telephone Pole in the Shape of a Cross Makes Up for All the Tornado Damage. Thanks, God! March 26, 2015 Hemant Mehta

I Guess a Broken Telephone Pole in the Shape of a Cross Makes Up for All the Tornado Damage. Thanks, God!

Last night, a tornado ravaged Oklahoma City and nearby Moore, leaving a lot of damage in its wake. At least one person died, several more are injured, and thousands of people have no power.

“God is with us,” said one Oklahoma teen: 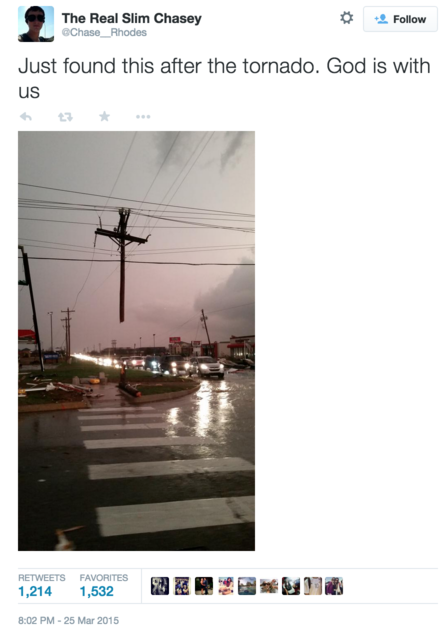 You know, just once, it’d be nice for God to stop by without going ballistic on the way there…

Since no one else seems to be saying it, that’s just a broken telephone pole. But give it a few more days and I’m sure locals will fight to prevent it from being fixed because, you know, Christian persecution and all.

If you’re able, you can make a donation to the Red Cross here for relief efforts. That, unlike God’s misguided messaging, will actually help people affected by the tornado.

March 26, 2015
Lehigh (PA) Officials Say Giant Christian Cross at Center of County Seal Has Nothing to Do with Religion
Next Post

March 26, 2015 Liberty University May Have Violated the Law by Hosting Ted Cruz's Campaign Announcement
Browse Our Archives
What Are Your Thoughts?leave a comment