Earlier this week, we learned that Wichita State University, a public school, had a possibly-taxpayer-funded chaplain for their basketball team: 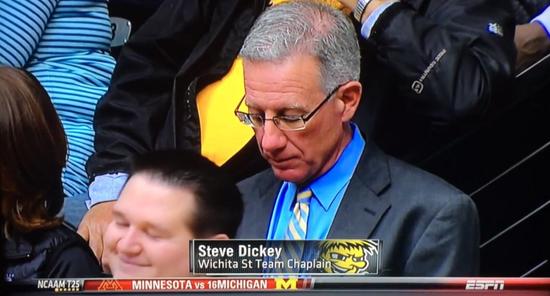 The Freedom From Religion Foundation now claims there are “five more public universities that inappropriately employ religious leaders for their basketball teams.”

Those schools — all of which played in this year’s NCAA men’s basketball tournament — are Louisville, Maryland, Virginia, Kansas, and Oklahoma. All have been sent letters from FFRF inquiring about the finances involved with the chaplains and what policies the schools use with them.

“Public school athletic teams cannot appoint or employ a chaplain, seek out a spiritual leader for the team, or agree to have a volunteer team chaplain because public schools may not advance or promote religion,” Seidel told the universities.

FFRF Co-President Dan Barker noted that giving these chaplains secular titles compounds the violation by blurring the line between a legitimate position and an abuse of that position to “[help] basketball players learn how to love God,” as Wichita State chaplain Steve Dickie put it.

Incidentally, Maryland, Virginia, and Kansas have all been knocked out of the tournament, which tells you something about how much God appreciated their prayers.