Christian Woman Says She Knew of Her Prophetic Gift Because She Could Predict the Plots of Movies March 26, 2015 Hemant Mehta

Cindy Jacobs is the Christian preacher who once blamed the death of a flock of blackbirds on gay people in the military. So when she and her husband interviewed Rebecca Greenwood, a self-proclaimed “Prophet to the Nations,” you knew some eyebrows would be raised.

After explaining how she felt the power of God at a Benny Hinn rally (seriously), she said there were hints of her prediction powers from a young age (at the 5:55 mark): 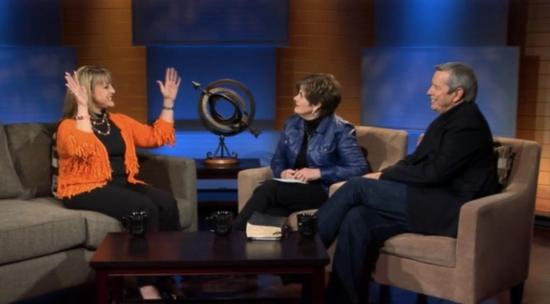 Cindy Jacobs: You know, my gift doesn’t work like that at movies, and I don’t go to that many, but Mike’s does! And I hate that! I go, “Now, I do not wanna know the outcome,” you know, I deal with nations…

Mike Jacobs: And that’s not prophetic with me…

You know, I’ve seen some Christian movies before… and I’m pretty sure a five-year-old could’ve told you how God’s Not Dead would end. That’s not because the kid has powers. It’s because most movies — certainly Christian ones — contain no nuance whatsoever. You know what’s gonna happen before they ever begins.

But, you know, silly me. I guess I just understand how the Gift of Prophecy works.

Poor Mike! He tried to be the voice of reason and was shot down. If only he could’ve said what he was thinking: What the hell are you talking about?

March 26, 2015
Liberty University May Have Violated the Law by Hosting Ted Cruz's Campaign Announcement
Next Post

March 26, 2015 The State of Atheism in America... from a Christian Perspective
Browse Our Archives
What Are Your Thoughts?leave a comment