Arizona State Senator Sylvia Allen (R) was discussing a bill Tuesday that would allow citizens to carry concealed weapons and bring them into public buildings.

Along the way, she decried the moral decay of our country and suggested offhand that the legislators should be considering another bill to fix that: 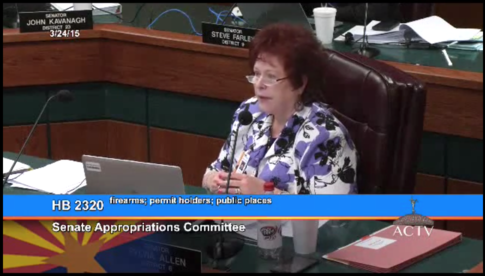 … How we get back to a moral rebirth in this country, I don’t know, since we are slowly eroding religion at every opportunity that we have. Probably we should be debating a bill requiring every American to attend a church of their choice on Sunday to see if we can get back to having a moral rebirth. That would never be allowed.

Forced church on Sunday for everyone! (Tell me again, Christians, how your religious liberty is being threatened…?)

Not that going to church would do anything. We obtain our morals independently from what pastors say in the pulpit, and I find what many Christian churches preach grossly immoral. We don’t need lessons on love from people who have done everything in their power to make life miserable for LGBT people. The only person who should be going to church is someone like Phil Robertson, who would apparently be out raping, shooting, and castrating people if he didn’t have God teaching him right from wrong.

***Update***: I should’ve pointed out earlier that Allen is the same politician who said five years ago that the Earth is only 6,000 years old:

March 26, 2015
The State of Atheism in America... from a Christian Perspective
Next Post

March 26, 2015 Mississippi Sheriff's Department Paints "In God We Trust" on Patrol Cars, Then Flaunts It on Facebook
"Taint nothing, I grew a siamese twin on my stomach who can predict the future."
Brian Shanahan Survey: Atheists Are More Likely to ..."
"How ghastly do you have to be for your own church to dump you?"
Mundusvultdecipi Klingenschmitt: I Lost My Navy Chaplain ..."
"They tend to see their beliefs as self-evident truths."
ORAXX This Brief Documentary on Christian Nationalism ..."
"Trans people just want to pee in peace. If anything, they’re more likely to be ..."
Brian-E Preacher Andrew Wommack: Trans Rights Supporters ..."
Browse Our Archives
What Are Your Thoughts?leave a comment