A Third of Millennials Have No Religious Affiliation… and Other Highlights from PRRI’s Latest Survey March 26, 2015 Hemant Mehta

A new study on Millennials and their attitudes toward issues related to sexuality and reproductive health was just released by the Public Religion Research Institute.

What does it say about the “Nones,” those of us who want no part of organized religion?

1) We represent the largest subgroup of Millennials; a third of adults 18-34 have no religious affiliation. 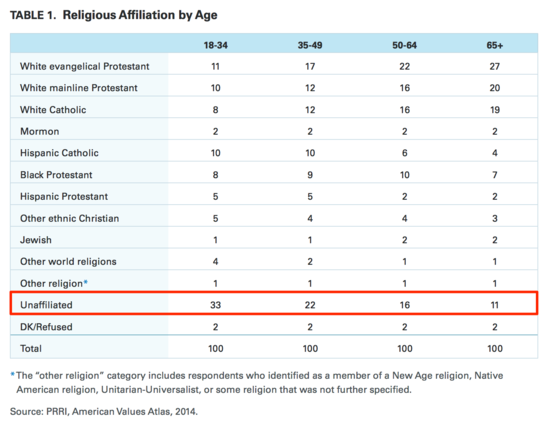 PRRI says “Unaffiliated” is “the single most common religious identity among this generation.” There may be more Christians overall, but only when you lump together very different denominations.

2) We overwhelmingly oppose requiring a prescription to obtain emergency contraception like the Morning-After Pill. Only a quarter of the Nones support the extra, unnecessary hurdle. 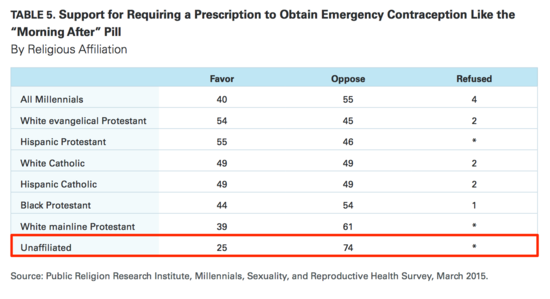 3) We believe abortion should be legal in almost all circumstances. However, 21% of the Unaffiliated opposed the procedure — hardly a fringe group. 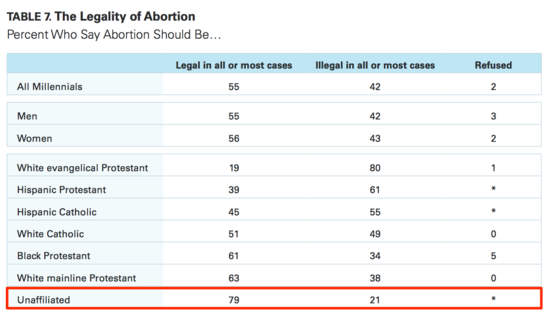 4) We’re sensible on the issue of sex education:

Eight in ten (80%) religiously unaffiliated millennials and more than seven in ten white mainline Protestant (76%), white Catholic (72%), and Hispanic Catholic millennials (74%) say an emphasis on safe sexual practices and contraception is a better way to prevent unintended pregnancy than an emphasis on abstinence.

6) Most of us think the Supreme Court was wrong about the Hobby Lobby case:

Now, obviously, “Unaffiliated” isn’t synonymous with “atheist.” The bulk of the Nones are people who believe in a Higher Power (and even the divinity of Jesus) but who shy away from religious labels for whatever reason. I suspect if you polled atheists separately on all these issues, the results would be even more skewed.

The full survey is here.

March 26, 2015
Stiefel Freethought Foundation Pledges up to $5,000 to We Are Atheism to Help Them Get Back On Track
Next Post

March 27, 2015 Canadian Postal Worker Complains About Delivering Mail That Goes Against His Deeply-Held Religious Beliefs
"Christians seem to think, and I'm not kidding here, that Hitler and the Nazis were ..."
RAM Conspiracist: The Unvaccinated Are Being Treated ..."
"Imp like the ones who paint photos in The Colour of Magic?"
Marie-José Renaud Christian Hate-Preacher: The Pope is the ..."
"Sheeple are able to identify other sheeple. They're the only ones who can tell the ..."
Sisu Toska Conspiracist: The Unvaccinated Are Being Treated ..."
"To an extent, the church could claim a right to distribute their bibles, sure. But ..."
Makoto Georgia Churches Tried Recruiting Public School ..."
Browse Our Archives
What Are Your Thoughts?leave a comment