If you live in the Dolores Park area of San Francisco, you’ll be happy to know that church-goers get a special perk on Sundays: No parking tickets!

Other people, recognizing that privilege, have also started parking in illegal spaces, creating an environment where everyone’s breaking the law and no one gets fined. 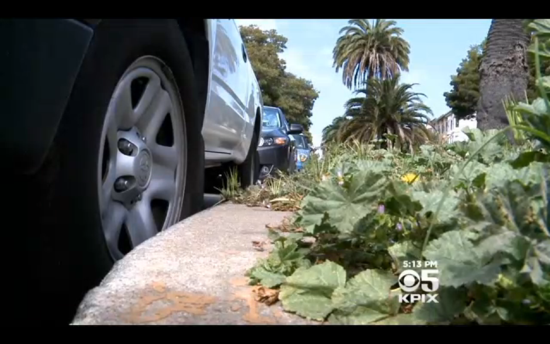 Parking would be at a premium if the city wasn’t looking the other way, letting worshipers double-park at the medians on several streets, turning two lane streets into one lane streets. The double parking makes it more difficult for bicyclists to navigate the neighborhood also.

It’s been an ongoing argument with some who think it violates church and state separation, turning a blind eye to hundreds of $110 violations each week in deference to the religious community.

And, it gets more complicated with some churchgoers saying they can’t find a place to park along those medians because of all the sunbathers at Dolores Park who have realized they can get away with double parking too.

The city says it just doesn’t have the resources to ticket everybody, but it’s not their responsibility to provide free church parking. It’s their job to enforce the law. If they began doling out tickets to everyone they could — even if they couldn’t get around to everyone — you’d see those spots start opening up again very quickly.

And if they don’t want to do that, then make it explicitly clear that parking is free for everyone in the area on Sunday. There’s no reason churchgoers should get a special break from the government.

March 24, 2015 Awkward Sex Advice from a Christian Motivational Speaker
Browse Our Archives
What Are Your Thoughts?leave a comment