Check out this page from the student handbook for Edon Northwest Local School District in Ohio: 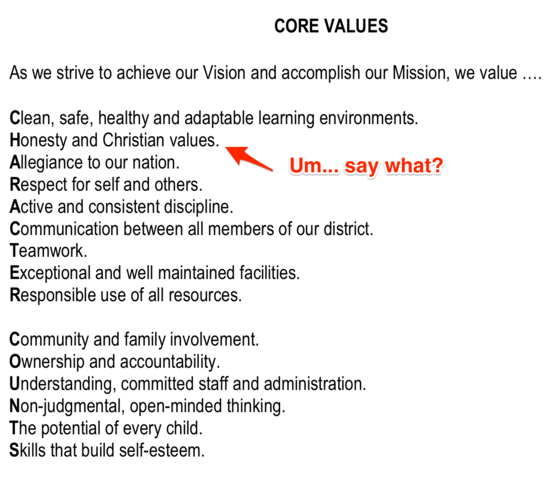 Which “Christian values” do they want students to uphold? Being willing to kill someone if God tells them to? Stoning people who violate any of the Ten Commandments? Condemning gay and lesbian students in the district who decide to date someone of the same gender?

(And is it weird to anyone else that they separate “honesty” and “Christian values” as if they’re different things?)

In any case, there’s no reason for a public school district to promote “Christian values,” no matter how vague those values are, in the handbook. The ACLU of Ohio sent district officials a letter yesterday asking them to fix the handbook and alter their other Jesus-promoting activities:

The letter to the Edon Northwest Local School district, which is near the Ohio-Indiana border, cites the school system’s student handbook, which references “Christian values,” and what the ACLU says is a practice of inviting ministers to pray at mandatory school assemblies. John Granger, interim superintendent who joined the district in January, said he has not witnessed some of the incidents referenced by the ACLU, but that if the allegations are true, the district should make changes.

”This has already been settled by the United States Supreme Court,“ Mr. Granger said. “I would make a recommendation to the board of education that if we are in violation of the law, we should stop.”

The ACLU letter claims ministers attended assemblies before the Thanksgiving and winter holidays, and that students need parent approval to opt out of the events.

“These reports also allege that the ministers pray aloud, ask the students to join in the prayer and recite homilies concerning upcoming holidays,” the letter states.

Since he arrived in January, it’s possible that the new superintendent didn’t notice any of these violations first-hand, but let’s hope he’ll put a stop to all of it now that he’s been alerted to the problems.

March 24, 2015
Ken Ham: Climate Change Would Be "Startling" if Earth Were Millions of Years Old, But It's Not, So Don't Worry!
Next Post

March 24, 2015 American Atheists Will Air Its First National TV Commercial Tonight on CNN
"I was going to get a picture of him and draw a di⁮ck hole on ..."
Holytape MAGA Cultist: Republicans Who Lose Close ..."
"Thanks for bringing up their platform. It's...a whole new level of crazy. Instead of merely ..."
Dmar3 Texans Will Vote on Whether Churches ..."
"Don't look a gift horse without sauce for the gander."
Joe King MAGA Cultist: Republicans Who Lose Close ..."
"Sounds to me like they were playing to the Goobers in the crowd, cuz votes ..."
SltryPrNstyBrtsh&Shrt Pseudo-Historian Tim Barton Falsely Claims Constitution ..."
Browse Our Archives
What Are Your Thoughts?leave a comment