We know that Jehovah’s Witnesses are forbidden from receiving blood transfusions, even if it’s necessary to save their lives. While I think that’s ridiculous, I generally don’t care if people refuse those transfusions, focusing my rage instead on people who allow their children to die because of their religious beliefs.

But this story makes me reconsider all that.

A JW mother named Michelle recently gave birth to a girl, Emma Marie, but she lost a lot of blood in the process. Normally, blood transfusions prevent this from being a life-threatening issue, but Michelle refused… and her life ended soon afterwards. 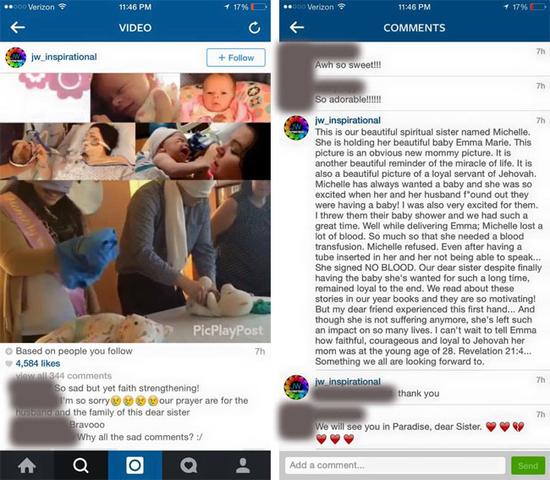 Well while delivering Emma; Michelle lost a lot of blood. So much so that she needed a blood transfusion. Michelle refused. Even after having a tube inserted in her and not being able to speak… She signed NO BLOOD. Our dear sister despite finally having the baby she’s wanted for such a long time, remained loyal to the end.

The other comments on the post praise her devotion with nobody asking the obvious question: “WTF?! Doesn’t anyone else see a problem with this?!”

As a former Witness, it is shocking to think I would once have either tried excusing or endorsing such mindless comments, or even offered similar sentiments myself. If the coercion in Watchtower literature is potent enough to allow a mother to excuse herself from her baby daughter’s life out of misplaced feelings of loyalty, it is certainly strong enough to make an otherwise intelligent person try to rationalize such a senseless loss of precious human life and put a positive spin on it.

I can only hope that little Emma Marie doesn’t grow up to blame herself, or her mother, for what has happened. Blame for this outrage lies squarely on the shoulders of a group of deluded, cloistered men in Brooklyn who have the power to save lives right now by lifting the needless ban on blood, but refuse to.

Don’t expect the Governing Body of Jehovah’s Witnesses to make any changes anytime soon. Religious leaders cherish tradition over common sense, even if it means saving a mother’s life.

March 24, 2015
This is the American Atheists Commercial CNN Refused to Air
Next Post