Televangelist Benny Hinn was admitted to the intensive care unit in an Orange County, California hospital this weekend after suffering heart problems in Brazil last week. The 63-year-old healing evangelist is expected to make a full recovery, but recognizes that he may have overdone it during a week-long crusade in South America.

“This is a challenge, but I’m getting good reports,” Hinn told Charisma News. “We don’t have all the answers … as we get older, our bodies need repair.”

In other news, Benny Hinn has a heart.

That’s kinda odd for a pious charlatan who has no problem doing this:

At one Hinn service a woman — hearing the evangelist’s anonymously directed command to “stand up out of that wheelchair!” — struggled to do so for almost half an hour before finally sinking back, exhausted. 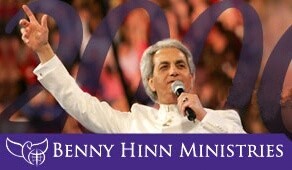 A professional bullshit peddler for four decades, Hinn has long managed to convince people that God healed them. In fact, he and the Almighty frequently put patients’ health in danger. For instance:

For an HBO television special, A Question of Miracles …, Benny Hinn Ministries was asked to supply the names of as many [healed patrons] as possible for investigation. After thirteen weeks, just five names were provided. Each case was followed for one year.

The first involved a grandmother who stated she had had “seven broken vertebras” but that the Lord had healed her at the evening service in Portland. In fact, x-rays afterward revealed otherwise, although the woman felt her pain had lessened.

The second case was that of a man who had suffered a logging accident ten years previously. He demonstrated improved mobility at the crusade, but his condition afterward deteriorated and “movement became so painful he could no longer dress himself.” Yet he remained convinced he was healed and refused the medication and surgery his doctors insisted was necessary.

The third case involved a woman with self-described “hearing loss,” which her physician told the investigative team had been “very mild”; she had in fact recovered many moons before the Hinn treatment, he added. The best we can say for the faith healer is that he didn’t make things worse in this patient’s case.

Others weren’t so lucky.

The fourth case was that of a girl who had not been “getting enough oxygen” but who claimed to have been healed at Hinn’s service. In fact, since the crusade she “continued to suffer breathlessness,” yet her mother was so convinced that a miracle had occurred that she did not continue to have her daughter seek medical care.

Finally, there was what the crusade billed as “a walking dead woman.” She had had cancer throughout both lungs, but her doctors were now “overwhelmed” that she was “still alive and still breathing.” Actually, her oncologist rejected all such claims, saying the woman had an “unpredictable form of cancer that was stable at the time of the crusade.” Tragically, her condition subsequently deteriorated and she died just nine months afterward.

The Gospel Herald assures us that Hinn will be fine. What the publication doesn’t mention is that that’s thanks to the skilled intervention of nurses and doctors, and thanks to pharmaceutical science.

Hinn’s oldest daughter, Jessica Hinn-Koulianos, reported that her father was in Brazil for an intense ministry that catered to crowds of over 100,000 people. When he returned this last weekend, he began complaining of shortness of breath. His daughter urged him to see a cardiologist who has since treated Hinn for lack of oxygen in his bloodstream.

When Benny Hinn gets sick, he doesn’t mess around with faith healing. He goes to a hospital. What does he know that he’s not telling his followers?

March 24, 2015
Kirk Cameron's Saving Christmas Is No Longer the Worst Movie in IMDb's History
Next Post

March 24, 2015 Why Does Wichita State University's Basketball Team Employ a Chaplain?
Browse Our Archives
What Are Your Thoughts?leave a comment