Duck Dynasty patriarch Phil Robertson (below) wanted to tell his audience at the Vero Beach Prayer Breakfast on Friday that atheists don’t have any moral authority because, apparently, you need God to be good. It your typical Christian apologist bullshit… but the example he used to illustrate his point is just appalling: 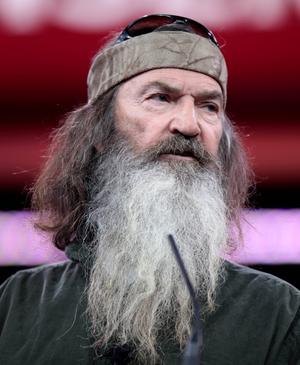 I’ll make a bet with ya. Two guys break into an atheist’s home. He has a little atheist wife and two little atheist daughters. Two guys break into his home and tie him up in a chair and gag him. And then they take his two daughters in front of him and rape both of them and then shoot them and they take his wife and then decapitate her head off in front of him. And then they can look at him and say, “Isn’t it great that I don’t have to worry about being judged? Isn’t it great that there’s nothing wrong with this? There’s no right or wrong, now is it dude?”

Then you take a sharp knife and take his manhood and hold it in front of him and say, “Wouldn’t it be something if this [sic] was something wrong with this? But you’re the one who says there is no God, there’s no right, there’s no wrong, so we’re just having fun! We’re sick in the head! Have a nice day.”

If it happened to them, they probably would say, “Something about this just ain’t right.”

What sort of fucked up bet is this…?

I guess the only thing keeping Robertson from raping, shooting, and beheading other people is his fear of God and interpretation of biblical morality… in which case, I’m glad he believes. If he didn’t, they’d need to make a six-part HBO documentary about him.

March 24, 2015
Why Does Wichita State University's Basketball Team Employ a Chaplain?
Next Post