You know it’s a bad sign when a Presidential hopeful officially announces his candidacy at a school known for its fundamentalist Christianity, but Sen. Ted Cruz (below) will be making that announcement today at Liberty University, the school founded by Jerry Falwell. (He announced his candidacy on Twitter late last night.) 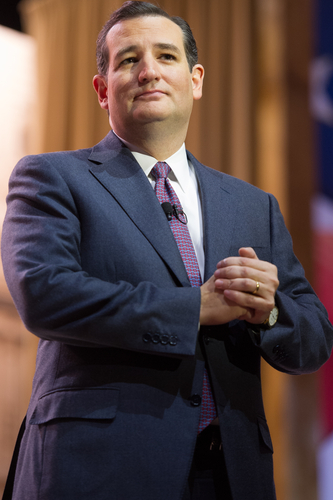 Cruz will launch a presidential bid outright rather than form an exploratory committee, said senior advisers with direct knowledge of his plans, who spoke on condition of anonymity because an official announcement had not been made yet. They say he is done exploring and is now ready to become the first Republican presidential candidate.

This is the same guy, by the way, who once said:

“I think anyone in politics you’ve got a special obligation to avoid being a Pharisee, to avoid ostentatiously wrapping yourself in your faith,” Cruz said. “Because I think in politics, it’s too easy for that to become a crutch, for that to be politically useful.” The Pharisees were a Jewish sect known for strict observance of law.

Not only has Cruz wrapped himself in faith, he’s practically a mummy.

The Southern Baptist will likely win over the evangelical Christian voters in Iowa. He’ll win over the right-wing base. But he (thankfully) has no chance of winning over moderates in the general election (if he gets that far).

If he did, though, it’d be a disaster for anyone who cares about church/state separation. The Supreme Court would see more Scalias, any progress made on LGBT rights would be rolled back as much as possible, and don’t expect even lip service to non-Christians from the White House.

Remember: The first official act of Cruz’s campaign is speaking at the university founded by the guy who blamed 9/11 on feminists, gays and lesbians, the ACLU, and those who supported abortion rights. How much more symbolic can you get for what lies ahead?

March 23, 2015
Morning Prayers Are a Part of the San Antonio Police Department Daily Routine
Next Post

March 23, 2015 "Godless? Good" Ads Will Appear on Edmonton (Alberta) Buses for the Next Month
Browse Our Archives
What Are Your Thoughts?leave a comment