Meth-Dealing Priest and Money Launderer Kevin Wallin Would Like a Light Sentence, Please

If Father Kevin Wallin had peed in the baptismal font, smoked kush in the confessional, and humped a life-size crucifix, his bosses and parishioners would probably only be half as shocked as they are by what Wallin really did do.

Wallin, now 63 years old, was formerly the priest at St. Augustine Parish in Bridgeport, Connecticut, but was suspended in May of 2013 after church authorities say they learned that the pastor was engaging in gay sex in the church rectory. He also had a habit of dressing in women’s clothes, according to reports at the time.

But that pales next to the meth-dealing and money-laundering.

The out-of-control priest allegedly laundered his excess drug cash [from the sale of methamphetamine] by investing in a local business. 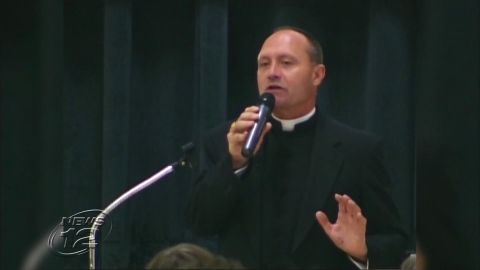 That business was the Land of Oz Dorothy’s Place, an adult store in North Haven, Connecticut, that sold pornographic videos and a wide assortment of sex toys. According to the allegations, Wallin sold meth from a parking lot outside of his sex emporium, as well as from his own apartment in Waterbury, Connecticut. … Wallin was also a crystal meth addict, according to court documents.

Wallin is thought to have sold between one and three pounds of meth a month.

He’s now asking the judge to impose a lighter-than-usual sentence, because

… the proposed 10- to 11-year bid behind bars is just too much for Wallin who, prior to his rather steep fall from grace, was considered a pillar of the community, working tirelessly for various charitable organizations over the past three decades, and delivering sermons that were popular with his parishioners.

Yes your Honor, I did break the law, and I betrayed the religious principles I prescribed for my flock. I know that most mortals get at least ten years if they do what I’ve done, but I have this here collar. I deserve a break!

Wallin’s lawyers have submitted 80 letters of support to the judge, including one signed by Cardinal Edward Egan, the former Archbishop of New York, who died earlier this month.

The priest thinks he should get about a 60 percent reduction of the proposed jail term. He’s prepared to serve four years plus community service.

March 23, 2015
"Godless? Good" Ads Will Appear on Edmonton (Alberta) Buses for the Next Month
Next Post