The Catholic network Aleteia is named after the Greek word for truth, so this report must be totally truthful:

“His blood has half-liquefied,” the Archbishop of Naples, Cardinal Crescenzio Sepe, said at the conclusion of Pope Francis’ address to diocesan priest and religious in the city’s cathedral. “It’s a sign that St. Gennaro loves the Pope, who is neapolitan like us.” 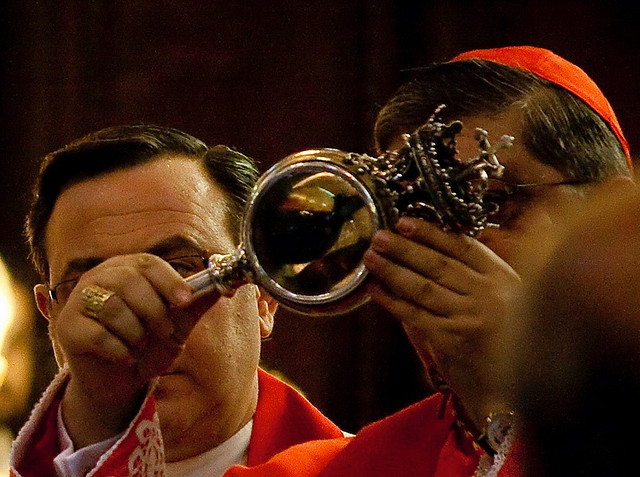 Half-liquefied? Was it only a half-miracle, then? Not to these folks:

As Cardinal Sepe … announced the miracle, in the adjacent streets people could be heard shouting with neapolitan passion: “It’s a miracle, it’s a miracle!” …

The dried blood of St. Gennaro, which is preserved in two glass phials in the Naples Cathedral, traditionally liquefies three times a year: on the saint’s September 19 feast, which commemorates his martyrdom in the Catholic liturgical calendar; December 16, the date of the eruption of Mt. Vesuvius in 1631, which was believed to have been halted through the saint’s intervention; and the Saturday before the first Sunday in May.

Wait — St. Gennaro halted the 1631 eruption of Vesuvius? The one in which up to 6,000 people perished? That’s one helluva redefinition of success!

But if you’re a believer, it’s skeptics who have taken leave of their senses. The 18th-century bishop Alphonsus Maria de’ Liguori wrote that the blood miracle was evident to everyone:

The most stupendous miracle, and that which is greatly celebrated in the church, is the liquefying and boiling up of this blessed martyr’s blood whenever the vials are brought in sight of his head. This miracle is renewed many times in the year, in presence of all who desire to witness it; yet some heretics have endeavored to throw a doubt upon its genuineness, by frivolous and incoherent explanations; but no one can deny the effect to be miraculous, unless he be prepared to question the evidence of his senses.”

The Catholic Church could lay all doubts to rest by allowing independent scientists to examine the creepy substance, starting with a chemical analysis to see if it even is blood. But alas:

[The Church] has not allowed independent tests on the phials containing the blood.

Such suspicion-raising reticence has given rise to an obvious conclusion: that the whole thing is just a pious hoax. This is how it could be done:

In 1991 a group of Italian scientists — Luigi Garlaschelli and two colleagues, Franco Ramaccini and Sergio Della Sala — demonstrated that they could simulate the effect with a thixotropic gel, a substance that liquefies when agitated and resolidifies when allowed to stand.

[At] about the same time, two American researchers — forensic analyst John F. Fischer and paranormal investigator Joe Nickell — showed they could reproduce a liquefying and recongealing miracle blood using a colored oil-and-wax mixture. When slightly warmed by heat sources such as nearby candles and body heat, the bogus blood can suddenly liquefy. Nickell and Fischer jokingly attribute their phenomenon to “Saint Februarius.” …

Adding to skeptics’ suspicions, there are some twenty other saints’ bloods that liquefy, virtually every one of them from the Naples area — suggestive of some local secret.

It is, however, true, that Catholicism has the power to severely influence people’s vital fluids; the Church has made my blood boil on plenty of occasions.

(Image by Paola Magni via Wikipedia)

March 22, 2015 Nebraska's New State Patrol Superintendent Has a History of Proselytizing While on the Job
Browse Our Archives
What Are Your Thoughts?leave a comment