A new book by investigative journalist Gerald Posner, a 732-page tome titled God’s Bankers, lays bare the “history of money and power at the Vatican.”

[T]he church from the beginning has been an all-too-human institution that ­often follows a logic of self-interest, placing the good of its members ahead of those outside it, and the good of those in positions of ecclesiastical power ahead of the good of everyone else. To a greater or lesser extent, this has been true of most institutions throughout history, though it has been a particular problem in the 2,000-year history of the church, with its lack of democratic accountability and deep roots in the corruption-prone political culture of the Italian peninsula. The result has been a tension — and sometimes a blatant contradiction — between the church’s exalted claims for itself and its behavior.

Think of medieval popes waging the Crusades — raising armies, sacking ­cities and conquering territory — in the name of Jesus Christ. Or prelates torturing apostates and heretics during the Inquisition. Or Pope Pius V expelling Jews from the Papal States in 1569. Or Pope Pius XI signing the Reichskonkordat with ­Hitler, which, in return for winning a measure of freedom for German Catholics ­under the Nazis, assured silence from the Holy See over the forced sterilization of 400,000 people and then only the faintest of ­objections to the Holocaust. Or more ­recently, bishops and other church officials concealing widespread and repeated child sexual abuse by priests.

I imagine that by this point, Bill Donohue‘s ears are producing steam, but Posner has only just scratched the surface: 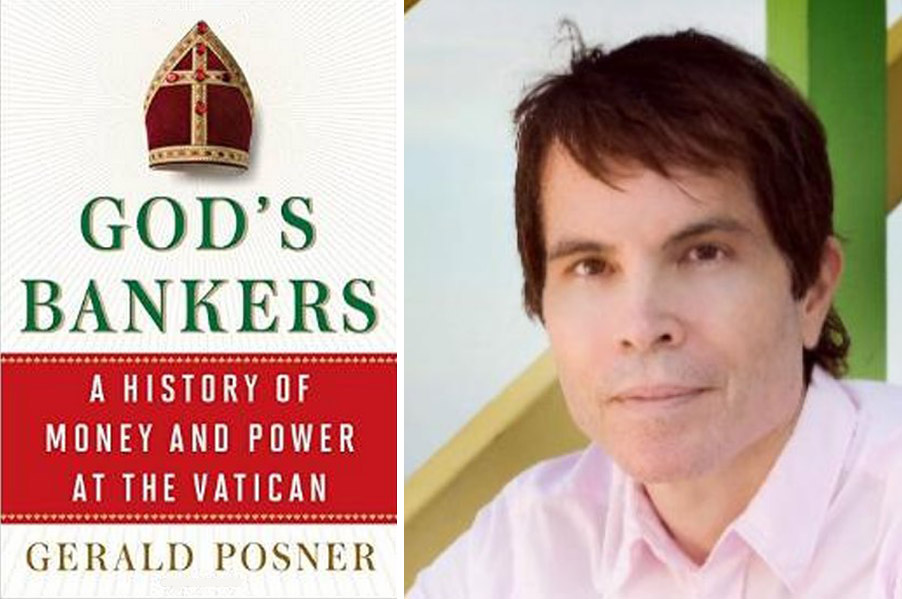 Posner weaves an extraordinarily intricate tale of intrigue, ­corruption and organized criminality — much of it familiar to journalists who cover the ­Vatican, though not widely known among more casual church watchers — from Pius XII down to Benedict XVI. These were years when the Vatican moved beyond the last vestiges of feudal restraint to become “a savvy international holding company with its own central bank” and a “maze of offshore holding companies” that were used as sprawling money-laundering ­operations for the Mafia and lucrative slush funds for Italian politicians. …

The cumulative effect of Posner’s detective work is an acute sensation of disgust — along with a mix of admiration for and skepticism about Pope Francis’ efforts to reform the Vatican Bank and its curial enablers. Pope Benedict, too, ­attempted to bring the bank into conformity with the European Union’s stringent money — laundering and transparency statutes. But the effort failed. With the Holy See engulfed in a maelstrom of scandals in early 2013 — the pope’s personal ­butler leaked a huge cache of embarrassing ­documents to the Italian press, and a 300-page report exposed a “‘gay network’ of ranking clerics” that indulges in “regular sex parties” and exerts “‘undue influence’ in the Curia [the Vatican bureaucracy]” — Benedict became the first pope in nearly 600 years to resign.

Will Pope Francis do better in cleansing the temple, as it were?

So far, Francis is proving to be a far more effective institutional reformer, with an aggressive, hands-on approach that seems to be yielding positive results. The question is whether it will make a real, lasting difference. Posner, ending on a hopeful note, seems to think it might. One wonders whether he would have been wiser to conclude by recalling the cynical motto that’s been heard to echo through the halls of the Vatican bureaucracy down through the centuries: Popes come and go, but the Curia goes on forever.

After teetering on the edge of bankruptcy several times, the Vatican appointed Bernardino Nogara as its new financial advisor in 1929, who straightened out the church’s finances and grew a $92 million investment from [fascist dictator] Benito Mussolini into almost $1 billion.

During [World War II], Nogara began investing in Italian insurance companies which “developed into stakes that profited from the ongoing murder of Europe’s Jews.” … These companies made money by keeping all financial assets from life insurance policies of deceased Jewish policyholders, and refusing to pay for those still living.

After hearing reports that a group of Pauline monks in Philadelphia were involved in a financial scandal, church officials discovered that the monks in question had spent almost $20 million in charitable donations on a life of luxury. The monks would raise funds for religious projects, yet would spend the money on cars and personal expenses. Despite their high lifestyle, they also defaulted on $4.3 million worth of church bonds. The vicar-general kept a mistress with church money, and took half the salary of friends appointed to monastery jobs. Half the monks left the order when the Vatican ordered them to turn over their televisions, stereos, cars and credit cars. To hide the scandal, the Vatican Bank sent more than $5 million to cover the cost of the monks’ defaults and pay back creditors. The hush money also helped to avoid being sued or facing criminal charges.

[In 2009,] internal documents smuggled out of the Vatican Bank … proved fake charity accounts were created and instead used for political donations, laundering, and embezzlement. Even donations to real charity accounts fell into the mix and ended up disappearing.

The laugh-out-loud-funny formal name for the Vatican’s bank, by the way, is the Institute for Religious Works.

If Posner’s hefty volume is too big a demand on your time, this 2013 article in the Financial Times, the result of an 11-month investigation, should give you a good little taste of what God’s Bankers have been up to while the Almighty, apparently, turned a blind eye.